Why Are Finland’s Schools Successful? by LynNell Hancock
The country’s achievements in education have other nations doing their homework

Worth a read to all American educators.  The quote that made my day?

“Children from wealthy families with lots of education can be taught by stupid teachers,” Louhivuori said, smiling. “We try to catch the weak students. It’s deep in our thinking.”
Read more: http://www.smithsonianmag.com/people-places/Why-Are-Finlands-Schools-Successful.html#ixzz27rl2AZOo
END_OF_DOCUMENT_TOKEN_TO_BE_REPLACED

Recently I read the new juvenile fiction novel Wonder by R.J. Palacio, about a boy born with a facial disfigurement who is about to enter public school for the first time.

I was on a team with two others, Paige Horst and Katie Estes, cohorts of a graduate class in teaching young adult literature.  Our goal was to create a book trailer for Wonder.  We focused on the motif of space and the universe in the novel.

I recommend Wonder for adults and children.  It’s a great message about kindness.

In the last chapter Greg Boyd argued that God expects all Christians to “turn the other cheek,” but he may not necessarily hold nations to a standard only held within a covenant with him.

Chapter 8 begins the other side of the book.  Before, we looked at “practical” questions that apply scripture to situations.  The second half deals more with interpreting and understanding what scripture says on the matter, beginning with Ingrid Lilly’s question “What About War and Violence in the Old Testament?”

END_OF_DOCUMENT_TOKEN_TO_BE_REPLACED

I remember one time we were with some friends watching How to Train Your Dragon with some friends who had children.  I said, “I wonder if there’s some critics who say this film is bad because it’s telling us to love terrorists or something.”  The guy said, “yeah, can you believe people actually believe that?”  I think he meant the loving terrorists thing.  Of course the whole point was that the dragons weren’t the real enemy, but the monster they were serving.  So is there a kind of person we are not called to love?

While the previous chapter focused on soldiery, in chapter 7 Greg Boyd asks, “Does God Expect Nations to Turn the Other Cheek?”  We actually may be surprised by his answer.  I had previously read Boyd’s book The Myth of a Christian Nation, a terrific read that asks us to reconsider the naive notion that America is “Christian” in any tangible sense, by looking at scripture.

He reminds us that Jesus’ instructions are unconditional, and that God has even the worst, most violent of our enemies in mind, not just meanies down the block, in Matt.5:38-48; Luke6:27-36; Rom.12:14-21; 1 Peter 3:9,14-18.  Imagine, he says, that Al Qaeda ruled America, and you will know the animosity the Jews felt toward Rome.  But since what Jesus did for isn’t just what he did, but reflects what he wants us to do (be willing to die innocently loving our enemies and not harming them), Christians don’t have the right to choose who they will and won’t love, will and won’t show loving action toward.
END_OF_DOCUMENT_TOKEN_TO_BE_REPLACED

“They triumphed over him
by the blood of the Lamb
and by the word of their testimony;
they did not love their lives so much
as to shrink from death.” -Revelation 12:11

Happy International Peace Day, everyone.  A day we should all celebrate.  In part 5 of the review we looked at the difficult question of how to be or work with policing in a peace community.

Chapter 6 is a message easier for me to accept up front, and is a conclusion I have already drawn.  Justin Bronson Barringer asks, “What About Those Men and Women Who Gave Up their Lives so You and I Could Be Free?”  A question which he feels “seems an attempt to shame the one to whom it is directed as one who dishonors soldiers.”  As if to say that the people who don’t love soldiers are the ones who want them to come home, not the ones who want to send them out to shoot and get shot on the sender’s behalf.

END_OF_DOCUMENT_TOKEN_TO_BE_REPLACED

Dave is weird, but I love him.  DMB was a fresh taste of music for me that opened me up to the music of the 90s.  I don’t understand why his biggest fan base is frat boys in ball caps.  Shouldn’t y’all be listening to All American Rejects or something?  I’ll also never understand why I like him.  That boy is one filthy hedonist.  But he’s also an introspective philanthropist.  DMB’s music is a world rock mix of genres that knows how to have fun. 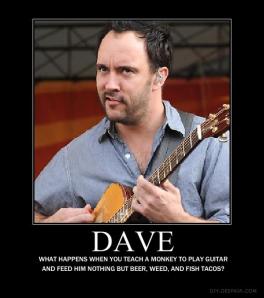 END_OF_DOCUMENT_TOKEN_TO_BE_REPLACED

The last chapter dealt with Hitler.

Chapter 5 deals with a question we might often overlook: “Must Christian Pacifists Reject Police Force?”

One reason it’s overlooked is that, until 200 years ago, military and police weren’t really seen as separate entities in most of the world.  They are both government agents authorized to use force, and even violence, if necessary.  The distinction remains important because, unlike war, police can truly “be accountable to legislative regulation” that “at least stands some chance of punishing only the guilty while protecting the innocent.”

In this chapter Schlabach first introduces the concept of nonviolent policing, which some people may regard as a joke.  How are police effective if they don’t use force?  But the same question could be asked of soldiering, perhaps.
END_OF_DOCUMENT_TOKEN_TO_BE_REPLACED