Have we run out of room for people?

If you live in Southwest Virginia, you’ve heard by now about the little enrollment problem Virginia Tech has got itself into. This fall the university is about to take in an extra 1,000 or so students it didn’t plan on taking in. END_OF_DOCUMENT_TOKEN_TO_BE_REPLACED

“We tune because we care.”

Back in 2002, about to record A Carolina Jubilee, The Avett Brothers were hired as a wandering band during freshmen orientation at Virginia Tech. Nobody wanted to listen to them. They kept following people around trying to find an audience.

Seth and Scott told this story to their VT audience twelve years later, as if to say, “look where we are now.” In all the shows I’ve seen since 2007, the band has inflated and changed their style, but they have not lost what makes them who they are. I saw the same energy, passion and soul.
END_OF_DOCUMENT_TOKEN_TO_BE_REPLACED

Calling all videography, drama and media students at Virginia Tech, I have a task for you:
END_OF_DOCUMENT_TOKEN_TO_BE_REPLACED

Frankie and Bridgette notice that the Hokie Bird statues are beginning to disappear and reappear in various locations in the town, and police are looking for the vandal,  It soon becomes apparent that the birds are actually stationing themselves for an some kind of invasion.  Then they realize it is really a misunderstanding and that the Hokie Bird statues just want to go home, and are circling up for the mother ship to take them away.
END_OF_DOCUMENT_TOKEN_TO_BE_REPLACED 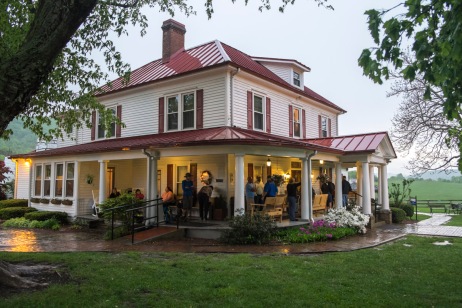 Frankie and Bridgette decide they’re tired of Blacksburg food spots and want to try somewhere outside the city of Blacksburg.  Everyone warns them not to leave and wander into the unknown mountains beyond.  They go anyway, and after getting lost and winding down an old back road eventually discover an old farmhouse that welcomes them in.
END_OF_DOCUMENT_TOKEN_TO_BE_REPLACED

Freddie and Bridgette are sent to review a new restaurant in the area, The Fork and Roast, located on First and Main. They enjoy the food, although it’s not that great, so they wonder what the big deal is about this place. When the waiter asked them how their food is, they misinterpret some secret signal, and are then directed to a back room where there is a black market, selling contraband unlicensed Hokie gear at a reasonable price.

A scuba diver discovers a body in the duck pond, a human corpse that had been weighed down by concrete boots.  Every possible explanation is arrived at until the campus police discover it’s a prank played by the VCOM students, using a cadaver.

Students at VCOM practice diagnosing an elderly volunteer who roleplays that he has Alzheimer’s.  They ask him questions and find out he doesn’t remember who even dropped him off, and they successfully diagnose him.

Only to realize he really is experiencing dementia and does not know where he is or where to go next.

Bridgette takes a writing course offered to the community, and her classmates are a diverse set of community immigrants and international students.  The teacher begins making good-intentioned but awkward comments about his classroom being like the UN and assumes he knows about other cultures, only for the students to give him blank stares like he’s an idiot.  He keeps apologizing for the English language being so complicated until an Indian student raises his hand and says “actually, English was very easy for me to learn,” and several students nod their heads.  The teacher, flustered, begins making the assignments harder to prove that English is so hard to learn.