So this happened recently. Dietrich Bonhoeffer’s worst biographer blocked two VeggieTales character on Twitter. It’s hard to get more petty than that.

Who is Dietrich Bonhoeffer, anyway? Well, he was a German priest and theologian who openly dissented against the Nazi party and was martyred for it. Because he protested the extermination of Jews, he was sent to a concentration camp and killed. He is also known for his hugely influential book, The Cost of Discipleship. These two things are inseparable, as his message urged Christians to dissent against the worldly powers rather than stoop to their level of world-running, even to the point of innocent death. He was also accused of joining the plot to assassinate Hitler when he was arrested. 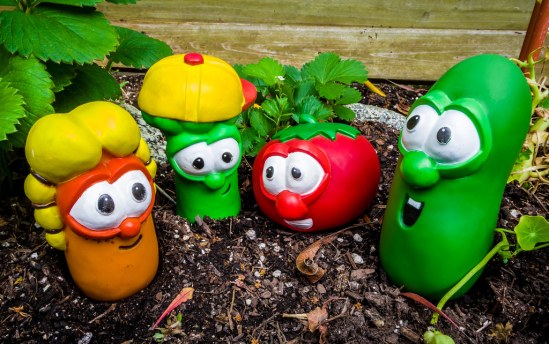 Numerous biographies have been written about him, and just one of those was written by Eric Mataxas, who also wrote scripts for VeggieTales. His biography is probably the most widely celebrated in the publishing world because it scandalizes Bonhoeffer as a heroic spy. No doubt, Bonhoeffer worked as an undercover informant between the U.S. and a German resistance group. But as actual Bonhoeffer scholars point out, Metaxas completely misinterprets Bonhoeffer’s life in order to make him out to be a politically right wing evangelical. He pulled a similar move on Reformation leader Martin Luther.

Metaxas was an ardent supporter of Donald Trump, and to this day believes that Trump was elected president but the voting was rigged by the Democrats to say otherwise. He has openly claimed that Jesus is on the side of Donald Trump, and that he would be willing to die for Donaly Trump’s victory. He also punched an unarmed protester last year.

The creator of VeggieTales, Phil Vischer, whom Metaxas once wrote shows for, is also the voice of Bob Tomato. His wife is Junior Asparagus. It’s cute. But Phil Vischer is openly critical of current evangelical movements that stray from the Gospel. He now hosts a weekly podcast about Christianity and political culture. One thing he’s pointed out is how many people who grew up with VeggieTales fell out of Christianity later when they were turned off by how they didn’t recognize their own faith any more after it had been hijacked by the religious right.

At one point Vischer poked fun at the “Jericho March” on Washington, in which conservatives protested the election because Trump didn’t win. He said, referring to wayward conspiracy theorists and Trump fans like Eric Metaxas and Mike Lindell, “Never has so much potentially toxic masculinity been mixed with the hugging on pillows.”

It was a good line. Naturally, the former VeggieTales script writer was offended. He needed a safe space from what he didn’t like hearing.

What a time to be alive. I guess the point is, be more like Vischer, and less like Metaxas. Don’t punch people you disagree with and write bad biographies. I’d much rather you make a goofy kids show with talking veggies to tech people what following Jesus is really about.