[The following poem was composed in 2005 in honor of the demolition of a historic building on the campus of Freed-Hardeman University, and was originally published in the school literary magazine.]

Times I Have Let Out A Sigh of Disappointment

I was there
When the historic Milan-Sitka
Was demolished
Like a game of Jenga.
And the crowd across the street
Let out a dry moan
As a large lumber truck
Pulled to a stop
In front of them

We have all been to the movies
Where the obese man
Or the woman with a tall hat
Is destined to sit in front of you
And you let out a whispered growl
Knowing it is all you can do
Because he’s stronger than you
Or she is too old and you’re too polite.

And who hasn’t seen a fateful game
Where soldiers fighting over a pigskin
Gather around that forked antenna
And the man with the iron foot
Who has rehearsed this act for weeks
Barely misses his mark
Because the midget made of wind
Climbed the pole and got in the way
To deflect the shot
And you drop your remote
Standing to squeal in shared defeat.

Try counting the times
You’ve planned on parking
Carefully in that certain spot
With your eyes focused
On the maneuver
Moments before another vehicle
Charged in to your chosen zone
Leaving you to bang your fists
On the wheel
Possibly honking in rage and
let forbid, shriek profanities.

So was it that day
I gazed upon a girl so fair
That she made me look a second time,
Wishing I had only done so once
For her boyfriend materialized
Directly in front of her portrait
Giving her a peck on the cheek
And blocking it from view
So they walked off together in the sunset
(Or something like that)
While in the background
The historic Milan-Sitka crumbled to pieces
To the moving sound of taps
But I was too distracted to see it.

[author note: I still have a brick from that building.] 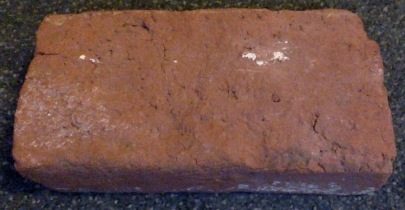