Junior year began the actual IB classes, incredibly rigorous examinations of difficult literature. We had to think more critically than ever before. Some of my friends were full IB, all 4 core classes plus like 2 or 3 extra being IB level. I would have died. And because I was not full IB, I felt the pressure to display my intelligence to my peers. But I also still wanted to be a goofball. 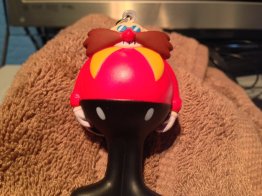 Mr. Bolte just plain understood us. He could anticipate how we were and why we thought what we did. When we made stupid inappropriate jokes, he winced and shook his head. When we made truly clever ones, he bellowed out loud. The man had the best laugh. And when he felt like tossing out one of our generation’s token phrases, he would follow it with “as the kids say.” He would tell us stories of watching Spongebob with his daughter and laughing out loud stupid things like Patrick saying, “he got hit on the head by a coconut.” Random things like that.

Some girl observed that Bolte looked like that villain Doctor Eggman from Sonic the Hedgehog. I didn’t really see it, but whatever. He was bald with a red beard and large, round glasses. He was very soft-spoken and mild-mannered, but carried a jovial spirit. I felt echoes of middle school teacher Mr. Benson in this man’s goal of mentoring us as young people who would one day be future peers with people like him in some workplace or another. He allowed us to take our class discussions of theme and apply them to culture. And when we got out of line, he would squint with disappointment, wave his hands, and say “guys, guys, guys, let’s not.” He was cool about it. He was a total dork. But he was a cool one.

For our summer reading we’d tackled the great russian bear of a novel that was Anna Karenina. I didn’t care for Anna’s story, but I found myself identifying with Levin who, like me, had a crush on a girl and her sister, had begun to have a newfound love of the countryside, believed deeply in God, didn’t understand society, and loved to ponder the meaning of life. With Bolte we spent a whole day just talking about what we liked and didn’t like about the book. On days like this it was like a book club. We were all students who liked reading this stuff enough to want to be in there. It was a blessing. And Bolte was our conductor on this train.

As much as I had zero sympathy for the indifferent murderer Mersault in The Stranger, I enjoyed Bolte’s use of “The Myth of Sisyphus” to explain the operation of Existentialism and absurdity in Camus. Thanks to our teacher, I became interested in the crossover between philosophy and literature. I began to see characters as embodiments of philosophies, their situations displaying the principles behind them.

One of the highlights of English that year was reading Toni Morrison’s Song of Solomon. That story was epic and rich. Confusing, but rich. After reading the novel, each of us had to compose a long essay about a theme or motif in the novel and then deliver it orally before the class while Bolte recorded us. We were so nervous. But we had been given this tour through the panorama of imagery, characterization, and motifs by a grand master. I remember thinking I had to speak directly into the microphone recording me, and Bolte tried to hold back a laugh. My presentation was on the names in the book—Milkman, Pilate, Guitar, First Corinthians. I’d been given the confidence to plumb those names for rich meaning.

Mr. Bolte paid attention to our talents, and we did not go unacknowledged. When I played Reverend Parris in The Crucible, I decided I would carry a handkerchief around to wring my hands with as a demonstration of my character’s anxious, sweaty paranoia. After the play Bolte told us all what a good job we’d done, and he pointed to my characterization choice as an example of our creativity and insight.  I’d thought I was doing a horrible job with the role, but I felt so good about myself that day.

One of my fondest memories of that class is after exams one day, when Bolte sat on a stool and read a personal essay about his journey through different modes of heating a house. It sounds like a boring topic, but I was captivated by how he could find so much meaning in going from a house with electric heating to a log cabin with burning logs in a fireplace and a dog by his side. Now that’s good writing!

I think I may channel Mr. Bolte a lot as a teacher. I know I’m a dork. I try to be softspoken. I make it a point to compliment the creative talents of students involved in art, drama, or band. I teach philosophy with literature using the Transcendentalists. And from time to time, I share stories of watching cartoons with my child.