2. After a decade, and a lot of us are just now getting our lives together, and you think you just might have been a teenager masquerading as an adult until you were about 25.

3. You’ll be surprised by who you really miss and who really missed you—it’s most likely the best friend from elementary who you parted ways with by 6th grade.

4. You get irritated when the slide show runs and you realize who didn’t show up. And you wonder if that that means they’re lame, or you’re lame.

5. We pretend we haven’t noticed each other’s lives on Facebook, unless we never connected on Facebook, in which case you hope they’re not paranoid that you purposefully avoided them.

6. You will have at least one awkward interaction. Probably with someone you dated (or had a crush on), someone you used to bully (or be bullied by), or someone you hardly knew who tells you very personal things you’re not sure how to respond to.

7. The music is too loud, and several people are too drunk, for you to catch what everyone said. For all you know, someone said their mom died and you’re nodding your head saying, “that’s great!”

8. At some point in the evening, you will be blind-sided when you channel the old you, and it will likely be embarrassing.

9. No matter what happened when you were kids, and no matter what you thought would happen, it’s safe to say that for the most part everyone turned out OK and is happy to see each other shed the anxiety, pettiness and immaturity of adolescence.
Then you see that one guy macking on a 50-year-old woman at the bar.

10. There’s always at least one person who passed on, and sometimes it doesn’t hit you as hard as it does when you see everyone else again. If sharing 4+ years of school together doesn’t bring you solidarity, having known someone who died young certainly will. Cheers to those you knew, and cheers to those we hope to see again and again, even if you swear you won’t come back to the next one. 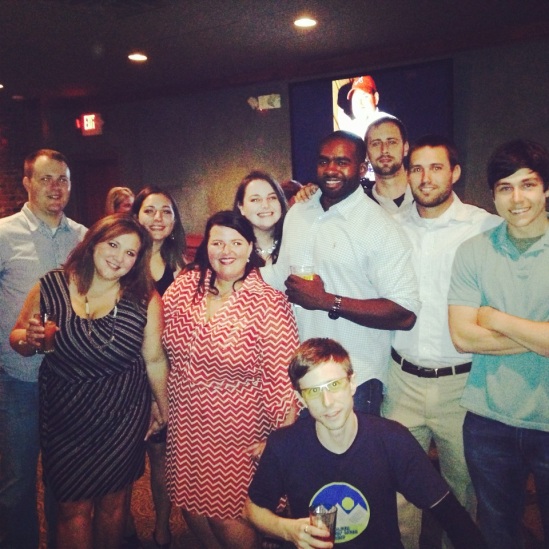 Me and my elementary class of ’97.