Author and complete nerd John Green has some pretty sweet quotes.  So I found some “posterizations” of a few of them, then made a couple of my own.  And I just might put some up in my classroom.  I’ve also included a few others for your enjoyment. 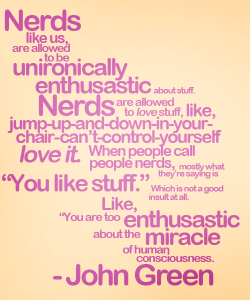 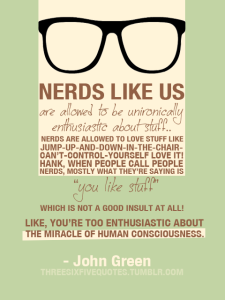 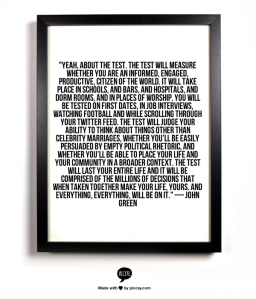 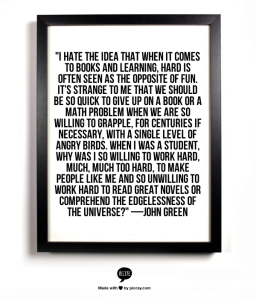 “Yeah, about the test. The test will measure whether you are an informed, engaged, productive, citizen of the world. It will take place in schools, and bars, and hospitals, and dorm rooms, and in places of worship. You will be tested on first dates, in job interviews, watching football and while scrolling through your twitter feed. The test will judge your ability to think about things other than celebrity marriages, whether you’ll be easily persuaded by empty political rhetoric, and whether you’ll be able to place your life and your community in a broader context. The test will last your entire life and it will be comprised of the millions of decisions that when taken together make your life, yours. And everything, everything, will be on it. I know, right? So pay attention.” — John Green, “The Agricultural Revolution: Crash Course World History #1”, January 26, 2012

“Saying ‘I notice you’re a nerd’ is like saying, ‘Hey, I notice that you’d rather be intelligent than be stupid, that you’d rather be thoughtful than be vapid, that you believe that there are things that matter more than the arrest record of Lindsay Lohan. Why is that?’ In fact, it seems to me that most contemporary insults are pretty lame. Even ‘lame’ is kind of lame. Saying ‘You’re lame’ is like saying ‘You walk with a limp.’ Yeah, whatever, so does 50 Cent, and he’s done all right for himself.” ― John Green, “How Nerdfighters Drop Insults”, July 27, 2007

“I hate the idea that when it comes to books and learning, hard is often seen as the opposite of fun. It’s strange to me that we should be so quick to give up on a book or a math problem when we are so willing to grapple, for centuries if necessary, with a single level of Angry Birds. When I was a student, why was I so willing to work hard, much, much too hard, to make people like me and so unwilling to work hard to read great novels or comprehend the edgelessness of the universe?” —John Green, “On Cuties and Cooties”, February 28, 2012

“I love being in cities with lots of other people because I’m reminded that there are billions of people like me and we are each stuck inside of our minds feverishly trying to crawl out to make connections with other people.” — John Green, “Umbrellas Amuse Me: Observations from One Day in Munich”, July 28, 2010

“Do you seriously think that teenagers are not able to read critically? When they read George Orwell’s Animal Farm, do they head out to the pig farms to kill all the pigs because they’re about to become communist autocrats? When they read Huck Finn, do they think that Huck should turn Jim in because the demented conscience of the community says so? When they read Waiting For Godot, do they think it’s cool to just sit around & do nothing? Well, probably they do, actually, that one doesn’t really work toward my point.” — John Green, “I Am Not A Pornographer”, January 30, 2008

“That’s one of the criticisms you hear about The Great Gatsby: that no one in the book is likeable. I don’t think that’s fair to Gatsby, or to Nick and to a certain extent I don’t think it’s fair to Daisy, but more importantly I don’t know where people got the idea that characters in books are supposed to be likable. Books are not in the business of creating merely likable characters with whom you can have some simple identification. Books are in the business of creating great stories that make your brain go all like ahhbdgbdmerhbergurhbudgerbudbaaaarrr. Sorry, I spend all my time with the baby.” — John Green, “The Great Gatsby: Living the Dream in the Valley of Ashes”, September 7, 2011

“Sometimes, you read a book and it fills you with this weird evangelical zeal, and you become convinced that the shattered world will never be put back together unless and until all living humans read the book. And then there are books like An Imperial Affliction, which you can’t tell people about, books so special and rare and yours that advertising your affection feels like a betrayal.” — John Green, The Fault in Our Stars

One response to “John Green Quotes”