I am indebted to James Loewen’s Lies My Teacher Told Me in the creation of this post. Please take the time to read it if you are a teacher, interested in history, or are curious about what people have told you about the world and how much of it is true.

Columbus Day was created in 1963. Representative Roland Libonati pushed the holiday thus: “[Columbus’s] Christian faith gave him a religious incentive to thwart the piratical activities of the Turkish marauders preying upon the preying ships of the Christian world.”

He brought many people to near extinction, and enslaved many others. When he landed on one of the islands in the Bahamas, he wrote, “I could conquer the whole of fifty men and govern them as I pleased.” Columbus may have sent more slaves than any one individual across the Atlantic ocean.

So from now on I am celebrating this day as Bartolomé de las Casas Day!

Bart de las Casas was a plantation owner who opposed the slavery and land-raping Europe had been so guilty of. He eventually freed all his own slaves and became a priest, spending the rest of his life advocating for the rights of American Indians.

Was he perfect? No. Is his history as a hero of the American Indians disputable on some accounts? Yes. But flawed as he was, he was ahread of his time. And he’s still far more worthy of a national holiday than Chris Columbus. I mean, Lincoln was more racist than often depicted, and technically violated the Constitution in order to “preserve the Union”, but he freaking signed the Emancipation Proclamation and bestowed a lot of honest virtues, so we celebrate his legacy across the nation. Our heroes can’t be perfect, but they better be pretty outstanding in the context of their time.

Establishment types will never adopt this holiday because Las Casas makes us think of injustice instead of “god-given” progress. Celebrate it anyway. Celebrate it from the streets and rooftops. Or by just marking it on your calendar and crossing out Columbus. Top-down holidays are lame anyway. If it hasn’t been celebrated in the streets, it’s probably pointless for a Congressman to make it official through a law.

Celebrate this day by giving back something of value you took from somebody, or restoring a freedom to someone whom you took it from, or just by arguing for the rights of an oppressed person, even if it seems trivial. 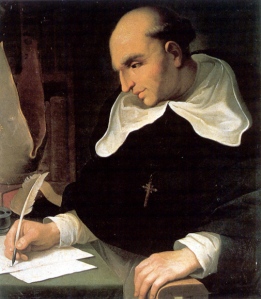 One response to “Today I celebrate Las Casas Day”