Did you happen to know that C.S. Lewis, author of Mere Christianity, The Screwtape Letters, and the Chronicles of Narnia series, wrote an outer space trilogy? Because a lot of people don’t.

It’s no Star Wars trilogy, but in it’s own way, it stands out as original. The books all tie in together, but each has its own flavor. And in some ways, I think the second one is the best. Just to communicate how strange and inviting it is, here’s a rundown. 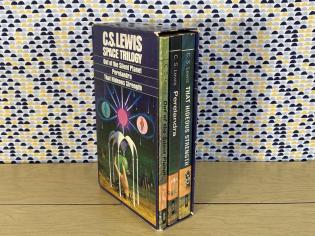 Out of the Silent Planet

This guy gets kidnapped by two professors and they travel on a ball-shaped space ship through space. Outer space is white, by the way, because of all the starlight. Look, the book was published in 1938.

And the two guys who kidnap the protagonist did it so they could sacrifice him to the planets’ gods, which are actually fallen angels. Did I mention his name is…Ransom?

So that guy Ransom from the first book, he gets sent by an angel to a brand new planet—Venus—because one of those two bad professors has arrived there and, well, let’s just say it’s the Garden of Eden all over again.

No literally, he meets the “Eve” of the planet. Except instead of not eating of the fruit, there’s another no-no entirely. Yeah so the arrival of humans actually kicks off the fall of alien-kind here.

Things get really dark when our guy starts discovering all these dissected frog-creatures lying around. So there’s that.

Oh and did I mention his name is…Ransom?

Ok so this one doesn’t take place in space, but it couldn’t happen without aliens from space who are actually good and bad angels being involved, and it’s totally sci-fi nonetheless. A space-inflicted dystopia.

Ransom is back. Except he’s the leader of a team of paranormal investigators/church/knights of the round table. He’s also crippled and, by 21st century standards, a wee bit sexist. Oh and one of the bad professors is the head of a think tank that is actually a fascist cult.

There’s a wizard, a woman in a weaponized leather belt, a warrior bear (I can’t remember if it talks but I don’t think it talks but it might as well be talking). Oh and the decapitated head of a convicted murderer is re-animated so it can give orders to the think tank, because why not?

So somehow the main character of the last 2 books is now the new King Arthur and has to prevent 1984 from happening, by guiding the new protagonist as a mentor after already risking his life to save 2 other planets. I did mention his name is Random, right?

Look, you just have to read them for yourself. It’s a total trip. I don’t see why we haven’t caught sight of a movie trilogy yet.