I still get emails from people I know and love, emails that weren’t written by them, or even someone they know, or even by some recognizable person or group, but have been forwarded from person to person, and somehow end up in my inbox, telling me what’s happening in the world, and what I should think about it. 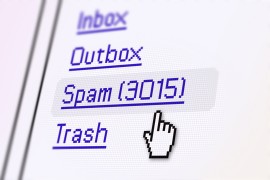 Chain emails, aside from other forms of manipulation, spread easily by asking people to forward them to multiple people, typically as many as possible. Chain emails have become famous for containing viruses or spam. But these emails can also be crafted to spread false rumors very quickly and to a mass audience. Anyone can sit at a computer and  slop down a series of rumors, maybe based on news, combined with emotionally driven lines that reinforce a certain viewpoint. Then they hit send, and if enough gullible people receive it, the message will spread.

So what are some ways you can tell that the endlessly forwarded email about this or that political controversy is fake? How do you know if it’s a rumor? There are a number of tell-tale signs:

When in doubt, delete. Trash isn’t worth your time. You’re better than that. Don’t let the enemy of Truth influence you with rumors and conspiracy theories.