“For years, as a conservative radio talk show host, I played a role in [conditioning] by hammering the mainstream media for its bias and double standards. But the price turned out to be far higher than I imagined. The cumulative effect of the attacks was to delegitimize those outlets and essentially destroy much of the right’s immunity to false information. We thought we were creating a savvier, more skeptical audience. Instead, we opened the door for President Trump, who found an audience that could be easily misled.”
-Charles J. Sykes, Conservative editor of Right Wisconsin

“If you want to preserve democracy as we know it, you have to have a free and sometimes adversarial press […] I’m not saying President Trump is trying to be a dictator, I’m just saying we need to learn the lessons of history.”
-John McCain, Republican senator and war veteran

“He was a war hero because he was captured. I like people who weren’t captured.”
-Donald Trump, speaking of John McCain, who once spent five-and-a-half years in a Vietnamese prison, where he was tortured repeatedly, two of those years spent in solitary confinement

“The point of modern propaganda isn’t only to misinform or push an agenda. It is to exhaust your critical thinking, to annihilate truth.”
-Garry Kasparov, chess grandmaster and political activist

“Why should Americans trust you when you accuse the information they receive as being fake, when you’re providing information that is not accurate?”
-Peter Alexander, NBC reporter, addressing President Trump’s unfounded claim that he had the largest electoral college victory since Ronald Reagan

“I do not have a clue what he was referring to.”
Henrik Selin, director of the Sweden Institute, Feb. 19, 2017

“What is truth?”
-Pontius Pilate, ancient Roman prefect of Judaea

“It is not truth that matters, but victory.”
-Adolf Hitler

Now is the winter of our dissed content. All of it, 100% allegedly fake. Not pieces. Not a story here or there, or a slight lean of bias in one direction or another. All of it apparently fake. Except one small corner, peddling conspiracy. Plots have been laid, inductions dangerous. But no evidence to demonstrate them.

When President Donald Trump told the world that his inauguration crowd was the largest ever, which he had no way of proving, he kicked off a tumultuous relationship between himself, his citizens, and the journalists of America.

Jesus declares, “You shall know the truth, and the truth shall  set you free.” But according to KellyAnne Conway, Trump’s top adviser, “alternative facts” are truth, and they mostly come from the President and his staff (as long as that president is our current one), because no news sources can be trusted with anything any more, except news sources that don’t criticize the President (at least, our current one).

It sounds like something coming out of North Korea, the Communist, Fascist, anti-Christian state on the other side of the world Americans love to mock, and should mock.

But here’s the thing: If we can’t trust any news source, we can’t trust any news source. When a President says that “the media” (meaning most of it, specifically media that doesn’t criticize him) is “the opposition party” and is all biased, the wise among us should cast some serious doubt on his words. He doesn’t mean opposition to him, but opposition to America. THE opposition. The media, in his mind, isn’t just Democrat-friendly/liberal-friendly. It’s somehow against America itself, his America.

But by what standard do we judge these news sources in “the opposition party,” and how does that standard apply to news sources friendly to Trump? Consider that Trump’s recently appointed chief strategist is Steve Bannon, head of a news source well known for catering to extreme right conservatives, pandering to millions of America’s most ardent bigots. Mere days after the inauguration, Bannon told the New York Times, “The media should be embarrassed and humiliated and keep its mouth shut and just listen for a while.” But when he says “the media,” he means every media outlet except for his and those like it. The first 100 days of a President are a really bad time for all of the media to not say anything. 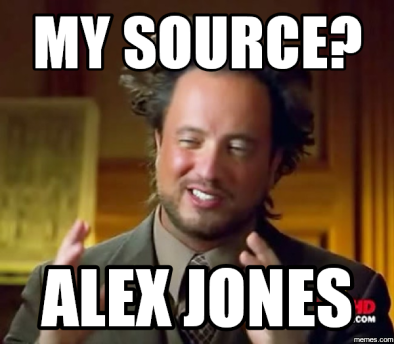 Nobody is saying that CNN, MSNBC, or NBC are perfect. They have their errors, their agendas, their biases. There’s no such thing as unbiased news or complete objectivity. But the same applies to Fox, for example, who runs with the motto “fair and balanced.” The thing is, the media is used to being held accountable. Their credibility (and livelihood) are continually at stake because their sole job is to report information. When they are found in error and want to keep their reputation, they have motivation to fix the error. For example, when ABC misquoted Spicer, they apologized and corrected their story. How many times has Trump or his staff actually apologized for giving us wrong or misleading information? How many times? When a President misinforms the public, there is less accountability. He can remain in office until another election, and his paycheck is not as directly unaffected by his truth telling as is a reporter. All kinds of reporters have been fired for fabricating stories. When a President’s strongest supporters don’t care to investigate his claims, we have serious trouble. In general, a president can’t be impeached for lying to the American people unless he’s under oath.

So if all these “lame stream” news sources are supposed to shut up because the president says so, who will replace them? Breitbart? The Drudge Report? Infowars?

Let’s start with Infowars, the website of Alex Jones, a far right conspiracy theorist who has gone on record claiming that that the Sandy Hook shooting was a hoax. Did Trump ever call Jones or Infowars “fake news”? No. Rather, Jones claims that 90% of his listeners were Trump supporters, and Trump openly declared to Jones: “Your reputation is amazing. I will not let you down.”

Let me boil it down for you: The current President of the United States has called CNN fake news, but celebrates the reputation of a man who believes that Sandy Hook might have been completely faked. Trump’s standard for who is and isn’t fake news is not a standard based on facts, but a standard based on who challenges him, particularly who challenges his false statements, statements like the claim that millions of Americans voted illegally…in an election that he won. Until that claim is proven, such a lie is being used to manufacture consent.

This is not about conservatives versus liberals. This is about what one man and his supporters are doing to a nation. As the LA Times have put it, “the scope of Trump’s falsehoods is unprecedented, and he is dogged in refusing to stop saying things once they are proved untrue.” Pulitzer prize winning website PolitiFact has found 72% of the Trump statements they’ve examined to be mostly false, 33% to be completely false, and 17% to be  blatantly”pants on fire” false. That’s higher than any other presidential candidate on their website (And yes, they cite their evidence). President Trump is a habitual, record-breaking liar.

Christians who decide to believe everything President Trump says have forsaken the wisdom of scriptures. They no longer “Test everything” and “hold fast to that which is good” (1 These. 5:21-22). Rather, they take at face value the words of one incredibly arrogant and greedy man, thrive on sensational third-rate news from controversial and irresponsible news sites, and recklessly forward gossipy emails written by cowardly, anonymous editorializers. Such Christians do not heed Paul’s words in Ephesians 5:11. “Take no part in the unfruitful works of darkness, but instead expose them.”

If you are not testing what you hear, working to expose darkness, you are not living up to the standard of the first century Church, whose founder was crucified under a despot that stifled all criticism of its leadership. It is better to fade from participating in politics and listen to those who are doing the research than to express a lazy opinion. The Church cannot afford academically lazy discourse with the affairs of the world. We are to be a witness to the world, not a rumor-mill to the world.

As countless people have pointed out, Trump’s war is not with “the media,” but with facts.  Donald Trump absolutely adores the media because it gives him attention and a platform. As a people born out of a faith that requires studious commitment to truth, investigation of claims, and skepticism of earthly power, the people of the Way of Jesus absolutely must look more closely into the claims of the U.S. President, rather than assume that he is right because “the media” is “picking on him.”

In a democracy such as the U.S., there is no single king. Every single voting citizen shares in kingship, is represented by the leaders he or she chooses, and is informed by a free press unhindered by those leaders. When the most powerful of those chosen leaders manufacture consent by lying about their own election and then trying to discredit every media source that does not continually laud and praise them, that is one of the first steps toward despotism.

If Christians Stand for Truth, we will not believe the President simply because he wears a patriotic hat and tells Christians he will be friendly to them. Jesus died to be our King. We owe it to our Lord not to be so easily misled by a man of the world. Jesus has laid claim on the Truth, for He is the Truth. Not a single man on this earth can claim such.

In a recent video, fraudulent televangelist Pat Robertson insisted that those who find Trump revolting are revolting against God.

Pat Robertson is a false prophet. Donald Trump is not the Lord’s anointed. I have 66 books that back me up on that.

By the way, the President still has yet to offer any proof to his claim that millions of Americans voted illegally.

One response to “If Christians Stand for Truth, We Will Not Believe the President at His Word”