It began with a boy with a lightning bolt on his forehead on a train. And just as the idea came to Rowling, a Dickensian novel could have started out like this: a little orphan boy with a mark on his face being laid at the door of some snobbish middle class brick-heads.

British literature has been said to have given birth to the novel, and it was during the reign of Queen Victoria that the form truly exploded, with the likes of Dickens, Bronte, Thackeray, Eliot, Hardy, Stevenson, Carroll. The novels of the industrial age of Great Britain solidified a number of traditions of long-form storytelling that influenced the immediate generation of writers, but also British (and even American) novels afterward. 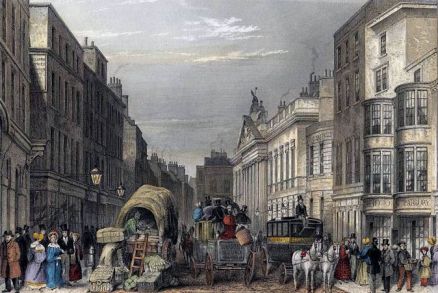 J.K. Rowling’s widely acclaimed best-selling novels stand out as perhaps the most well-known British novels in the 21st Century to the rest of the world. While over a century later, the Harry Potter series not only carries distinct traits of Victorian literature, it almost represents a kind of return through various eras of British literature, a steampunk cosplay romp in a parallel world like the kind we return to any time we read a book from a different time. We roam through European folklore, Arthurian legend, MacBeth, Oliver Twist, Dracula, and Middle-Earth, Hogwarts being a kind of museum of British storytelling motifs. One could almost call Rowling’s novels patriotic, a world where British literature stands like a wizard’s tower over world of imitative muggles.

Harry’s story defies genre in a way Victor-lit did before we really classified novel genre. It’s just a really big story of someone’s life. The broadest category it can fit is bildungsroman, a German word for coming-of-age story. We have a sensitive, curious child thrust into various experiences as a result of a tragic loss on the road to maturity. Novels like David Copperfield, Great Expectations, and Jayne Eyre fit in well. Even more specifically, Harry’s is an Erziehungsroman, an education novel.

Most obviously, Harry Potter’s is a “boarding school story.” Rudyard Kipling’s Stalky & Co. is actually a collection of 8 serialized short stories taking place in a college, much like Harry’s 7 episodes. Malory Towers, a 6-novel series, is about a girl trying to make good friends, get into mischief, and succeed at sports at a prep school. The St. Claire’s series involves two twins, like the Weasley twins. Harry’s cousin Dudley is a mirror to Billy Bunter, an overweight, greedy, lazy, self-centered prep school student.

While Victorian novels began to feature children, they began to be about children going off to school as publishers wanted to target the child population with stories that carry moral lessons. And there’s no doubt Rowling gives us plenty of moral lessons: be courageous, be loyal, don’t harm others, don’t be prejudiced, don’t fear death, family and friends conquer pain. Hogwarts, like any boarding school, has its own culture, its own world, and Harry’s introduction provides a way for us to be introduced to it. Americans in particular might not get the connection to the British experience. Take away the magic, and Hogwarts isn’t too different from many historical boarding schools (or any school, for that matter). You have a culture of friendship, academia, clubs and teams, rivalry, bullying, mischief, mentors, discipline, dating, fitting in.

According to Lana Whited, Hogwarts is inspired by Tom Brown’s School Days, about boys becoming gentlemen at a Rugby School. Stephen King called the books “shrewd mystery tales,” like Sherlock Holmes (a crime-solving, post-Victorian hero). Rowling has cited Jane Austen’s Emma has her favorite book, and strove to end each of her books with a twist  like hers. She identified with Nesbit, whose 1899 Treasure Seekers involved young children amusing themselves with perilous situations without adults to help them.

Rowling’s Potterverse is not only inspired by Victorian novels, but carries the torch of Victorian traits into the millennium, including having children as main characters, which wasn’t common before Dickens.

Serial format—Although each chapter is published as part of a distinct novel, each book is its own in a series. Though not atypical of children’s literature (designed to hook children on reading as well as make a profit), much Victorian lit was published first as serialized stories small enough to fit in a newspaper or journal. Large novels like Hard Times would first appear in weekly or monthly installments, much like episodes of television do today. Although Potter’s chapters are all sold to us at once, the books themselves were released in a serial format, with more than a year between each.

Moral Lesson—Victorian literature often had a central moral lesson, especially since kids were reading. Money does not buy happiness; social class does not exemplify you; the world has some good people in it. Many lessons come from Harry’s Hogwarts adventures, many of them expressed directly from Dumbledore at the beginning or end of each schoolyear: Deeds are what make you noble; friends make all things possible; Hold on to light in the darkness; Being smart isn’t everything; A true hero doesn’t fear death; and most importantly, Love is more powerful than any weapon.

Mischief—Since main character need complexity, they will get into a little mischief. Brit Lit has a whole genre, Picaresque, dedicated to rogues and their exploits. The Weasley twins inspire the troublemaker in Harry, and Maurader’s Map and cloak of invisibility together allow him to act just a little fiendish. “I solemnly swear I am up to no good.” “Mischief managed.”

Efforts to reclaim the past—In the first book, Harry wishes to see the parents he lost. In several of Dickens’ works, including Great Expectations and Tale of Two Cities, old family ties are reunited.

Classifying nature—Charles Darwin was that famous naturalist who classified species until he wrote The Origin of Species. Even the newspapers began to publish nature illustrations. Rowling’s universe includes a book, Fantastic Beasts and Where to Find Them, and central to Harry’s education is learning about magical creatures, Hagrid’s own expertise.

The supernatural—This one’s obvious. Harry Potter is about wizardrs and magic. Dracula, Jekyll and Hyde, and the Invisible Man were a few of the Victorian characters that encountered the magical, demonic, or just plain fantastical. Old Gothic tales confronted the industrial age to create a new genres, like Sci fi. In Harry Potter, the fantastic contrasts the muggle world we ourselves inhabit. Ghosts wander the halls, paintings talk, hidden rooms appear out of nowhere, and the undead can curse the living. Like many great scenes of Victorian literature, most of Harry Potter takes place at a castle or in the countryside.

Satire—Satire was Dickens’ main tool for exposing social issues, and Wilde’s method for critiquing our behavior. Harry Potter often turns out as a satire for British boarding schools, particularly in book 5, with the appearance of the OWLs (standardized tests) and the intrusion of a government agency, the Ministry of Magic. A magical world not only contrasts against that of ordinary muggles, but also reminds us of our own ways. The wizard world has its own absurdities that mirror our own, including gossip, bureaucracy, nepotism, class warfare, and hypocrisy.

As the train both premiered the industrial age and carried us forward into the modern age, so Harry Potter invited children to a classically nostalgic experience of literature that also carried us into a new millennium with stories bearing familiar values. Harry boards a train, a very old and conventional method of transportation to us that still seems magical, simply because steam engines do not belong in our era. 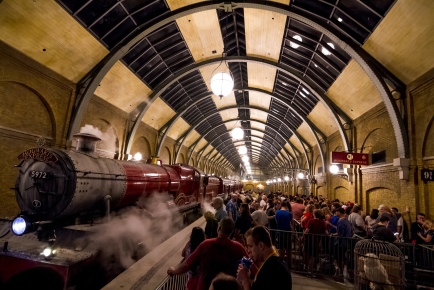 In the first film, Diagon Alley looks not so much like a place for witches and wizards as it does a Charles Dickens cosplay trip down a Victorian London Alley. We are transported to a place that is not too unfamiliar, and almost nostalgic, a place that transports adults into childhood, children into imagination, and an entire English-speaking culture into a mythical space of Britain’s multitudinous eras combined, a glorious hodgepodge of British lore. It does this as a series of novels, a distinctly Victorian echo of a time when storytelling universally accomplished what few children’s books have today.

For many readers, even adults, we find ourselves children once again in a terrifying, yet beautiful world of strange people, fantastic coincidences, and glimmering themes, only to look up at the master of the story and ask, “please, mam, may we have some more?”