Now what? The Avetts have gone everything now, but they did so slowly. Chart their last three albums, and you can tell they have merged from a heavy rock-centered bluegrass band into a more electric, pop-centered, all-American band. But they didn’t sell out after one or two original albums. They re-centered themselves naturally after half a dozen of the work they first came to be known for. They haven’t lost touch with their roots.

As soon as I saw the cover, I just knew they’d experiment more. They’d throw in some computerized beats, some mixed genres accentuated by techno-pop. But they somehow manage to weave a quilt of Americana that still maintains the fabric of their earliest years, as well as that of what they have acquired along the way.

Said Seth Avett upon announcing the album, “True Sadness is a patchwork quilt, both thematically and stylistically[…] There are moments of undeniable celebration and camaraderie, others of quiet and lonely exhalation. Throughout the album, we stitched together the boldest red and the calmest green, polka dots and stripes, the roughest denim and the smoothest velveteen. They came together because they are the best patterns we have and because each of us brought our own fabric to the quilting frame.”

So yea, this is their tacky album.

I saw them play last night in Roanoke. I was indeed treated to a quilt of styles woven and layered, brilliant and effortless. The show had a personal touch, turning lyrics into little jokes (“your life doesn’t change by the man that’s elected”), giving tribute to the late Leonard Cohen with a rendition of “Hallelujah,” and engaging in the audience with 3D flare. Old favorites like “We All Fall Down” and “If It’s the Beaches” mixed in.

They break into the line “have to find that melody alone” and we feel not alone but all together, even this strange drunk old man waving his arms around everyone intimately. They kick off with the titular “True Sadness” and the title words light up above the stage, sending them into a blues portion of the show that anticipates the flavor of an upcoming album.

Much more jamming than I remember, including Seth’s outstanding guitar shredding solo. Much more intimate acoustic runway time as well—Bob was in the hospital earlier, and needed a low-key show. Hearing “Geraldine” on a guitar and ukulele gives it a strange new flavor I didn’t know it could give. Next thing I know Scott has leaped off the stage and is making a run for the floor, meanwhile Seth is touring the aisles above. We might come and settle down here, they tell us. We wish. This show was wild, bright, warm and cozy all at once.

Tacky quilt, all right. Check out these patches. 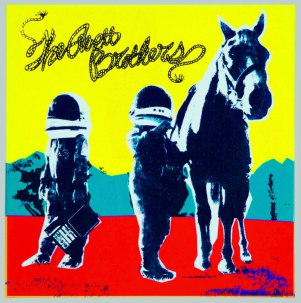 As with their previous album, the brothers open with a bold statement that they are exploring a new style. This soul-driven anthem is destined to be a poppy single, but that doesn’t make it trite. The lyrics are vague, yet meaningful. It’s a message that they don’t care if they’re being judged, because they’re making music with their heart. The sadness is in the haters, not me.
Patch: Funky soul

Before you think they’ve changed too quickly, the brothers give us a tune much like those on their previous three albums, complete with harmonica and references to mama. But the violin in particular on this track does something brand new. The sadness of not believing what others deem true.
Patch: 80’s Bob Dylan

We’re now given a soft stroll of thought through the fields of the country. We return to a common Avett theme, that of letting go. Letting go of sadness. Or maybe embracing a healthy kind.
Patch: Harry Nilsson, skipping over the ocean like a stone

Advice is dispensed from the wise. The simple discovers what the wise often neglect. The truth is proverbial, and it’s been there all along. It’s sad what you discover what you ignored all along.
Patch: Bobby Bare country

What is this? Perhaps the most surprising Avett track I’ve ever heard. I’m still to sure what to think of it. That’s sad.
Patch: Something from outer space? Sufjan Stevens with a beat?

We’re treated to a good jam session, still influenced by the sonic soundscapes of the previous song. I bet this one is fun live. Time to acknowledge the good and bad together, and hoe sometimes we let them intermingle. Sometimes the pull of temptation is too good, or at least the temptation to let out a little steam, and they demonstrate this with a musically pounding “screw-it” abandon. This song is much better live, the electronic show-off-ness taking backseat to the rhythm, vocals, and violin.
Patch: Alabama shakes

This truth is verbalized at the core of the record. We are all unhappy on the inside, and that’s what moves us. Understanding this essential, and thanking those who help lead us to face it, is perhaps the key to finding happiness. The battle never ends, but you’ve got the kingdom in you. No one is fine. Yet. Nothing wrong with sadness if it’s true. This song has a steady momentum you can’t stop.
Patch: Tom Petty

Like something off The Gleam records, we finally sigh in relief at this soft. We communicate the sadness of wishing, and the truth of our limitations, mostly in terms of our most intimate relationships.
The full band version sounds like I’m in an Old Navy about to buy some pants.
Patch: Gillian Welch ballad (retail outlet store pop if it’s the other version)

This song of sober regret is a brow furrow meditation on the frustration of the conflict between our desires and our actions. It is even an admission of the pain of knowing they changed their style, and in some sense their identities as Country boys, in order to survive. Or maybe in order to just hit the scene and make bigger bucks. It is not without regret.
Patch: Simon and Garfunkel folk

I’ve never had so much fun treading on the lyrics of something that sounds like it’s right out of Ecclesiastes. It’s a Caribbean smile on the unadorned truth that we all suffer, so we might as well dance.
Patch: Calypso

Well this one hits close to him for one of the musical brothers. When you’re famous everybody knows when you marry and divorce. So we get a goofy country blues yodel tribute to what it’s like to be a man trying to take care of himself after a painful separation. He might even be gloating about his newfound happiness. It’s old-school, and it’s a laugh. Many a divorced man might stand up and shout “A-men.”
Patch: 30’s Country

Where are we bounding now? Why are we psychedelic? Another song I’m not sure about yet. I don’t think they’re sure yet. I think that’s the point. Makes me wonder where they’ll go next. Will they do a movie soundtrack? Is it sad that I’d actually like to see that?
Patch: Queen meets Pink Floyd

Nice bonus track. And it’s more true to their roots. And they ask us to ponder, “do I look different without you?” Let’s not forget, they’ve faced change. Age, divorce, new influences, changing musical trends. I can forgive them for changing. I won’t reject them.
Patch:

In this album, true sadness isn’t just blue, it’s just true. The blues are stitched through this record, and true blues are less about being depressed and more about being content with expressing the truth, regardless of how painful it is.  In a way, this album culminates three albums of meditations on sadness. The first was brooding, the second light, the third a piercing and reckless thrust into the contrast of sadness and joy. The sadness is upturned, redeemed by the truth it tells.

They were just telling the truth. You can’t fight it if you face it. Maybe they’ve done that.