Much has been said about the Pixar theory wherein all the movies are linked to a single universe in which the inanimate objects and imaginary beings of our world are real and sentient.

In Toy Story, we had sentient toys. In Cars, we have sentient cars. The difference? In Toy Story, humans are still here, but in Cars, people are gone.

This doesn’t look like an alternative universe where there are cars instead of people. There are human landmarks. Cars have the same human-made design, and there are echoes of human culture everywhere. The cars themselves have personalities that imitate those of humans, and their language reflects humanity. Their car culture is derivative of our car culture and our human culture.

So what happened to the humans?

Theories have been offered, like John Negroni’s, all of them so far indicating that humans either died off or were sent somewhere. One way or another, this is some apocalypse in which machines have taken over. Some say it fits in with Wall-E, for example, and that humans were sent in space.

But I have a different theory, one that can fit with current theories or function as an alternative or off-shoot. For the most part, everything theorists like Negroni postulate is true. For my theory to work, and to understand why Cars is told the way it is, requires one fundamental difference.

The Cars in Cars are people.

Regardless of how other Disney/Pixar films fit into this, my theory behind Cars is that an event occurred in human history which led to the fusion of man and machine in order to save the planet. That is, the cars did not evolve their own personalities, but were actually created by humans to harbor human souls.

Whatever happened previously, and however Bi-Lo and Dinoco play a role, at some point humanity decided that we were too reliant on machines to live, and that it was too late for us to live in a world without them. The coexistence of mankind and machines was damaging the planet. One of them had to go. Unless, of course, both of them became one. We didn’t want to die, and we didn’t want our machines to go. So we became our machines. 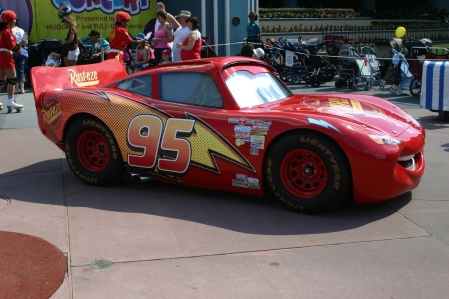 Regardless, I now need to defend my theory:

Ok. So the cars actually house the souls of people. But why? Again, when people began to rely to heavily on machines, we realized that one had to go. Realizing either option was impossible to embrace, we decided to meld them together. People could stay, but the only resources we would be consuming would be gas, oil, metal and plastic. In addition, the world of Planes hints that foods such as corn would play a greater role in making fuel. But in order for this to happen, the collective human conscience had to be fooled into believing they were cars all along. This required a tremendously genius operation across the world.

There’s a hint in Cars 2, as Francesco’s mother prays to Il Gran Produttore—”The Great Manufacturer” (or, literally, “the great producer”). In the world of Cars, we don’t see much of how cars are made, only repaired. Could it be that all of the vehicles, or at least a first generation, were produced by a single manufacturer using a singular process to install the rebooted souls of humans into vehicles? Some sort of collective amnesia had to be set in place to reformat the memories of humanity into believing they had always been cars, and no other sentient life form existed.

The new world is primed. Names of places are changed to Carburetor Canyon, Radiator Springs, The Cozy Cone, so that these new beings will feel comfortable in their new car husks. Even the landscape changes—Cadillac range, Willy’s Butte being a Pontiac ornament—which could have been an actual terraforming project or merely a reflection of how the cars see the world through their new lenses. Now it seems like the world was made for these beings they always have been. And they would be able to solve an energy crisis without having to worry about the viral destruction of organic humans.

So there’s my theory. When you peer into the eyes of Lightning, Mater, and Red the fire engine, you’re not just looking into living cars, but the souls of the very people who used to drive them!

It’s a collision of worlds.

One response to “My Pixar Cars Theory”