Chapter 8 addressed the violence in the Old Testament and how we reconcile that with Christian nonviolence.

Chapter 9 deals with a single passage that gets abused quite a bit: “Let Every Soul be Subject”.  Lee Camp tackles what this passage means in context, instead of in the absurd isolation in which it is often quoted, violently ripped from God’s word in order to serve agendas of violence.

If you read the entire passage of Romans 13, you realize that this one phrase was never meant to be a military mantra.  We are to “present [our] bodies as living sacrifices” before God, and commanded not to “conform to the age” (often translated “the world”).  Since we are a new creation, we live according to a new age.  So whatever authorities we are under, they’re not ours. 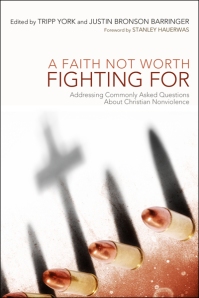 Unlike the world, we Christians believe that a Kingdom of ultimate peace is ushered in by Christ.  That kingdom is here, but is not fully realized in its eternal form until the end.  But if we look forward to it, we will emulate it here and now.  The kingdom at hand.  “We lay down our arms because the Kingdom of God,” says Camp, “which is characterized by beating swords into ploughshares and spears into pruning hooks, has been inaugurated in Jesus’s ministry, death, burial, resurrection and ascension.”  We are called to an alternative to the war-making of the age.  Oh, and in Romans 12, we are to pray for our enemies, and we are to let God carry out his “vengeance”.

Camp explains how in the West Christianity’s flesh vs spirit teaching has been misconstrued.  Martin Luther, though successful against a number of organized heresies, falsely taught that Romans 12 was just about the inner life and Romans 13 was about the outer life.  As if to say that God only meant for us to pray for the guy at work we can’t stand and that God will exact vengeance on your brother, but when it comes to the big stuff Romans 13 gives earthly a blank moral check to do “whatever is necessary”?.  This may explain why so many German Christians refused to comply with Hitler’s plans.  They were just following orders.  Romans 13, right?

But despite the West dividing the Bible into chapters, Romans 12 and 13 are all the same string.  And the peaceable kingdom of God still stands, though under the subjugation of earthly kingdoms, “authorities”.  And how does this look?  Well, much how Jesus looked before Pilate and the Roman scourgers.  The role of these authorities, in the words of Camp, is “to channel the vengeance and wickedness (of the world) back upon itself, to limit the destructive and maddening effects of violence by turning it on itself.”

I remember once being told that God created three institutions: The church, the family, and the government.  As if these three pillars could be found in a Bible passage somewhere, a holy trinity of establishments that are sacred and equal.  The church I get, but “institution” is not a word I quickly arrive at when describing it.  The family, created before the church was realized to us, only exists to point to the church as the real family.  Also, we need to look carefully at what we mean by “institution”.

An institution sometimes means a structure or a mechanism meant to control social capital, like a school or foundation.  It also sometimes means a custom that reproduces patterns of social capital, like dating or sending “thank you” cards.  The church and the family are not mechanisms or customs in the mind of Christ.  They are to be living organisms that produce social capital with new life, not try to control it in the world.  The church is not a product of society, but of God.  The world sees religion as just an institution of society.  Don’t conform to the world.  The kingdom of God is beyond the world, not a custom of it.

The government?  A different story.  An institution, certainly, because it’s a product of society.  In fact, there is no Biblical evidence that God created governments (any more than he created “all things”).

“But wait,” one may object, “have you not read your Bible, son?  It says it right there: God ordained.”  We must look at the actual word, not the translated word.  The actual word means to ordinate not to ordain.  There is a big difference.  The passage is not saying God anoints the rulers of the world, for we know that only in covenant-bound-Israel does he have any record of choosing a king.  He ordinates—he lays out their boundaries in an orderly manner so they no king ever becomes to powerful that the earth is without hope.

“God is not said to create or institute or ordain the powers that be, but only to order them, to put them in order, sovereignly to tell them where they belong, what is their place.” [my emph. added]

So once again, God is not responsible for the powers’ identity as rebellious to his way, but he does order them.  Camp says, “God employs the arrogance and violence of the nations against one another, so that the earth and its creatures are not utterly destroyed.”  God creates man, man rebels against God, man seeks to rule himself, becomes destructive, God uses man’s own destructiveness to keep himself and earth from being utterly destroyed.  No state is ordained by God, but they are all ordinated.

As far as being subject to authorities, we’re not subject to them because they’re right or good.  We’re subject because they are earthly powers and we are a spiritual power, because God uses them as “ministers” against one another’s powers, because Christ subjected himself before corrupt rule.  This is subjection, not allegiance.  Our obedience to these powers only extends so far as they do not call for us to disobey God or ask us to praise their endeavors.  “We must obey God rather than human authorities” (acts 5:29), not “we must obey God and country”.  The church is God’s bride, not Caesar.

Camp concludes with a call to drop the damnable rhetoric too many American Christians carry.  America is not the world’s great hope.  Such a belief, he says, is “patently absurd” and “fundamentally idolatrous”.  I’m reminded of when George Bush said in his ’03 address that “there is power, wonder-working power, in the goodness and idealism and faith of the American people.”  And instead of realizing that he coopted the lyrics of an old hymn about the power of the blood of the lamb that was slain for our salvation into a call to worship the golden calf of American might, droves of Christians pledged their allegiance to yet another earthly kingdom’s sword-bearing hypocrisy.  Why?  Because his rhetoric sounded Christian and made their blood hot for their country’s pride.

Oh, we’ll get to the sword-wielding thing.  The next chapter deals with Jesus meant when he said he came to bring one.
Oh, and to be fair, I promise to criticize Obama as well as Bush.  Not just because it’s fair politics, but because it’s a consistent judgement of policy.  We’ll see why.

So how do you feel about the church-family-government trinity idea?  Has anyone ever taught it to you?  Have you ever questioned it?  If so, what was their defense?  Did they provide a scriptural proof of this triad relationship?

If given the choice to obey God or your government, what would you do?  Are you consistent in this belief, or do you only apply it to certain scenarios?  Would you apply it to acts of violence?  How do you feel about endorsing such actions?

Do you see serving God and serving your country as equal pursuits?  What popular oaths can you think of that suggest such an attachment?  How do you feel about reciting them?  How do you imagine Hananiah, MIshael and Azariah would feel about this?

[next chapter: Did Jesus bring a sword?]

9 responses to “_Not Worth Fighting For_ Review: Part 9”