It’s not hard to believe that twenty years ago I walked into my high school German class to hear a classmate tell me that a guy flew a plane into the twin towers. I’m not hard on myself for laughing at first, because I instantly thought he meant some idiot who couldn’t fly steered his tiny plane into the building—it’s sad, but the kind of story we might chuckle at. Then they told me the rest of the story. This was no accident, and there were many deaths, and more to come in the following hours. To be honest, I didn’t feel furious or scared or heartbroken. Just shocked. What? This? Why?

Twenty years is a long time. It’s nearly a quarter of a century. But twenty years ago I absorbed this news as a young adult, a sophomore who had just recently started driving a car. Just a few months prior I had visited New York and rode a bus right by the towers. I took an elevator to the top of the Empire State building and saw the twin towers still above me. I saw them the size of my fingers from the top of the Statue of Liberty. That’s the only proximity I had, knowing nobody who was hurt or killed on 9/11. I knew New York like most Americans know it. The attacks were at New York but they weren’t on New York. They were on an entire nation.

You don’t forget seeing such a thing on the news the day it happened. You just don’t. We act sometimes as if we might one day forget, but the reality is that people are calling for us to remember something specific, and that specific thing often gets political. We’re not remembering just for the sake of remembering. The very thing we want to echo is a signal, a call to do something, or to live a certain way. “Never forget, so that…”

See, I don’t remember what I wasn’t there for. I’m not a 9/11 survivor any more than anyone else who, like me, only suffered vicariously through the terror—a word purposefully chosen—surrounding the events on TV.

It’s been one day since the 20th anniversary of 9/11. What are remembering now. How we treated one another in the aftermath? And how did that go? Because that experience was very polarizing across the country. I know because I participated in very different kinds of responses. And so did many others.

On the one hand, I hugged my family and prayed. On the other hand, I sent an email to nearly everyone on my contact list (the only social media besides AOL) reminding them that the men who did this were burning in hell, etc. I don’t even know why I did that. I just knew I had a bunch of energy and felt I was supposed to do something to show my outrage.

I got so focused on the news. I watched both Fox and CNN. I began to notice how differently they covered all the relating stories. And I watched The Daily Show, which kind of made fun of them both. A little more so Fox, of course. But stuff was happening. All over the globe. For the first time, it felt.

I wrote an Op-Ed in the Roanoke Times, because I wanted to be a writer and an event like this called for a rhetorical situation. It was all about patriotism, uniting together, and something something. But I remember not really feeling it, but just feeling that I was supposed to do it, as if I had to prove something. I got a lot of pats on the back when it came out, but I mean, who wasn’t writing patriotic Op-Eds back then?

I remember cancel culture rearing its head when the Dixie Chicks said something negative about George Bush, and people burned their CD’s (not the copying kind of burning, the destructive kind of burning). Well, I still listened to them, but I remember being fully on board with the invasions of both Iraq and Iran, without question. I even imagined riding in on an helicopter myself, finding bin Laden hiding in a hole, and preaching at him before executing him. And it wasn’t even so much because I was angry about what he did, but because that way it was about me being better than him and having the right to be looked at as a hero for doing to him what ought to be done to him.

I don’t remember writing to Congress pleading for emergency funds to be given to 9/11 survivors and first responders. I guess that didn’t involve enough violence or political agitation. That would have been more useful.

I do remember participating in an email forum for a history class that went south really quickly—again, this is before Facebook, Reddit, Youtube comments, or Twitter. And half the conversations went back to all of us, myself included, being experts on geopolitics, philosophy, religion, and metaphysics before we even had our diplomas in hand.

Lots of throwing darts at a poster of bin Laden. With my granddad. That one still makes me laugh. 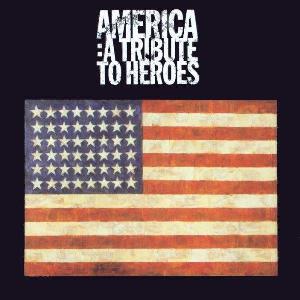 But I also I watched a benefit concert hosted in New York where a couple dozen musical performers sang songs and raised money to help victims of the attacks. I don’t remember if I dialed in and gave anything, but I went and bought the recordings and listened to them over and over again. Obviously watching a show and listening to songs isn’t much of an action, but the point is that, after all the posturing and the performative anger and self-righteous patriotism subsided, what I really got into was healing, poetry, prayer, artistry, love, peace. Those songs came to mean more to me because they connected to all the suffering I actually knew, and I felt more at peace afterward. Plus the performers were really good—from Springsteen to Nelson to Matthews to Vedder to Keys. And yes, even the Dixie Chicks.

That music, composed of songs written before 9/11 but performed in memory of it, was a tribute to those who saw the smoke and dove into it. Because it’s nice when a bunch of rich New York and Hollywood liberals realize all they need to do is just be the bards who tell stories of heroes. Not telling us who to vote for or what the country should look like. Some of them even prayed and called for prayer.

Getting that CD was a turning point for me, as afterward I channeled my confusions and frustrations into more creative endeavors. I wrote less about what I think everyone should be doing, who is right and wrong, and why I knew all the answers. I wrote more stuff that explored what we’re capable of doing, when it’s tough to figure out right from wrong, and why answers sometimes take humility and hard work.

Of course, that transformation didn’t happen overnight. But choosing to listen to healing media instead of watching divisive media was one of the smartest choices I made as a citizen hurting from a national tragedy. It’s a lesson we could still learn today, twenty years later, when every incident has to make us explode on social media.

I still have that America: A Tribute to Heroes CD. I sometimes listen to it around 9/11 or July 4th. I will never forget. But the reason why isn’t so I can justify invading another country for two decades, or racial profiling against Arabs,  giving a salute government spying on its citizens, or telling Muslims and Muslim-looking people to “go home,” or worse. It’s so I can remember that we should be the kind of people who treat one another the way we knew how when the smoke was rising and the sirens were blaring. I wasn’t there. But in a way, many more of us were than we realize. National trauma tends to do that. And we need to remember by way of national voices, sung or otherwise. We need to tell our stories, because if we don’t our traumas will tell them for us.