Ironically, Ken Starr recently declared that we are living in an “age of impeachment.”

I would hope so.

Starr went on to make a completely and entirely bogus claim, that only a statutory crime or lawbreaking was impeachable. Every law expert knows otherwise, and so did the founders.

Even after the decision to come to a verdict is past, new evidence still continues to surface, including DOJ knowledge of emails that demonstrate the president committed bribery. 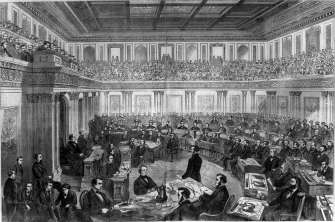 It remains to be seen whether a vote of guilty will remove the current POTUS from office. Most experts are saying that it simply won’t happen, since leaders fear it will further divide the country. Because we have yet to see impeachment lead to a guilty verdict. Andrew Johnson was found not guilty. Bill Clinton was found not guilty. Nixon, though resigning, could have been found not guilty, if he had enough supporters.

Trump himself knows that his supporters blindly support him no matter what he does. As he said in a rally once, “I could stand in the middle of Fifth Avenue and shoot somebody and I wouldn’t lose any voters.”

What good is a device to remove corrupted power if we always find an excuse not to in the name of national security?

This isn’t a case of partisan hackery either. While Democrats have partly sabotaged their own efforts to remove from office an executive they clearly can’t stand, plenty of respected Republicans have joined the movement to expose Trump.

But impeachment needs to continue. Every president in my lifetime should have been impacted for war crimes alone.  The more used to it we become, the more likely we might actually get to remove a bad leader.

I wonder if, during Israel and Judah’s line of horrible kings, which of the prophets complained about an “age of holding-kings-accountable-ment.” When a people start realizing their leaders aren’t living up to a high standard, is legally having them removed from office a sign of overreach against executives, or a response to overreach by executives? If you want to drain a swamp, the creatures you drop in the center of the whirlpool are naturally the first to get flushed.