Previously I wrote about how 1 Peter 3:15 “call to apologetics” should be read in context of its immediate passage to inform us about what apologetics is. In a passage that anticipates persecution from without, making a defense is seen as a holy necessity that must be done with gentleness and reverence.

I decided to read through the entire letter of 1 Peter, trying to imagine myself as his audience, and allowing the entirety of the letter to inform my understanding of “defending the faith.”

Peter introduces himself as an “eyewitness of the sufferings of Christ,” an apologetic statement and a revealing of the main theme of the letter. Likely writing from Rome, Peter’s audience was a broad scattering of Churches across Roman provinces, most of whom must have been formerly pagan. Many scholars say it was written during the reign of Nero, whom Tacitus described as torturing Christians after blaming for a fire in AD 64. Regardless of who was emperor, various local persecutions occurred all throughout the Roman empire in the first century.

As Peter reminds the churches throughout that they are born in a living Hope, he says many things that can inform our understanding of what it means to defend the faith. I found ten such statements in the letter: 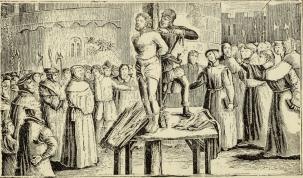 Peter, eyewitness to the suffering of Christ, was among the first of the disciples to always stand up for Christ. There was a time when he told Jesus he would die with him. But when that suffering came, he backed down. His zeal was cowed by the persecution of his Lord. This, his greatest defeat, taught him what it truly means to defend the faith.

There is no standing up for Jesus without being willing to suffer for the kingdom.

So Peter wrote a letter to churches exiled by an empire, praising God who made them born again, urging them to embrace suffering for righteousness as a purifying fire.

Suffering is a witness to the very cross of Jesus, which we proclaim. This is a kingdom where we serve our oppressors, wash the feet of others, liberate through love rather than rebellion. The spiritual evil of Satan is our one true enemy, and it is God who will vindicate us in the end. We persevere through hope, and live to love.

It is in the middle of this triumphant letter that Peter tells us to “always being prepared to make a defense to anyone who asks you for a reason for the hope that is in you.” We are spiritual exiles in a world ruled by our adversary, and this is why we must always be prepared to give a testimony of the Hope within us.

While I had a zeal for apologetics from a young age, I wish I had payed attention to what Peter was telling the exiled churches. I would have taken a much more humble route of proclaiming and giving a testimony of my faith from an earlier age. It is something I still must strive for.

In the final post, I examine some examples from my past in which I could have used a better application of 1 Peter 3:15.