As of this month, over 27 NFL players have chosen to sit, kneel, or raise a fist of solidarity during the procedural playing of the US national anthem.

This has strangely been met with some very angry reactions. People who don’t know what’s going on see rich football players refusing to comply with the pledge and imagine it’s just a bunch of spoiled brats who haven’t seen combat and therefore don’t respect what soldiers are dying for.

Some people in America seem to hate Colin Kaepernick more than they hate racism. That is part of why he initiated this wave of lamentation and solidarity.

Maybe overpaid NFL entertainers aren’t the best choice to…kickoff such a demonstration. But they sure know their power to draw attention to a cause.

Are they being disrespectful to their own country or its symbol?

It’s hard for me to see such meek silence in a context of rage and disillusionment as anything but immensely respectful. None of these players has demonstrated verbally, boisterously, or obnoxiously. Their protest has been contained with immaculate strength. Compare that to Occupy and the Antifa.

As Robert Klemko of Sports Illustrated has written, these demonstrations are not gestures of disrespect. The U.S. flag does not represent soldiers or policemen any more than it represents all citizens. It represents a nation founded on the notion that all men are created equal. So when men (and women) are not treated equally, its citizens have reason to grieve. That is why Marshawn Lynch, Michael Bennett and Colin Kaepernick knelt. It was never because they were so rich and spoiled that they didn’t love America. And Michael Bennett, by the way, is the son of a veteran.

These men kneel not in disrespect of the flag, but rather, because they feel what the flag actually stands for is being disrespected. They are calling people out of their comfort zones. People who spend their time and money on sporting distractions from turmoil. And Kapaernick already has made a sacrifice because of it. He is currently out of the job, most likely due to the controversy of his audacity.

So here is a simple way to comprehend the concept of kneeling during the national anthem, and why it is a completely respectful gesture.

This is how the government leads its nation in mourning. 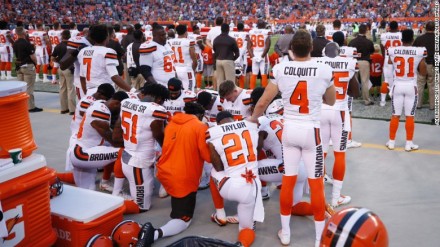 This is how citizens direct their nation in mourning.

I don’t watch the NFL, and I do think its players and coaches are overpaid. But degrading the character of these players based on a very American gesture is itself unAmerican. Regardless of how many people died for America to be free, equal, prosperous, etc., for many it is hard to feel proud of of a country that isn’t living up to what they were told all those people died for.

If the U.S. flag can fly at half-staff to reflect mourning, lamentation, and respect, so can its citizens kneel in a call for lamentation.