[Read part I and part II]

In the third act of Flannery O’Connor’s short story, having stood on the assumption that none of the world’s miseries are her responsibility, Mrs. McIntyre justifies her own lack of care for those in her care, rejecting the call of the Gospel. Expecting her employees to be grateful to work for her, she hypocritically fails to embrace gratefulness. Like someone who only reads half of the creation account, she wants to be a master without being a caretaker. The world revolves around her.

The woman only keeps the dwindling peacocks around as “a superstitious fear of annoying the Judge in his grave.” It seemed for so long she has doled out just enough mercy to alleviate her fear of judgment. Whatever is left of Mrs. McIntyre’s conscience keeps her from firing Mr. Guizac until she can talk it out with the priest. She argues that the displaced person “doesn’t fit in” (again harkening back to the Nazi’s lebensraum—room for living—justification for invasion and extermination).

In her talk with the priest, who believes the Pole came to the farm to help redeem it, Mrs. McIntyre expresses her ironic theology. “as far as I’m concerned,” she said and glared fiercely, “Christ was just another D.P.” [or displaced person]. Her rejection of Christ as not fitting into her perfectly ordered world, she speaks the truth. Christ himself was, at one point, a refugee, and spent his entire adult life not being welcome in his own town, abandoned by his own followers, rejected by the scribes and mocked by an empire. He was displaced from Heaven and from earth. He was even displaced from the grave.

The peacock stands “still as if he had just come down from some sun-drenched height to be a vision for them all.”
The priest remarks, “Christ will come like that.”

Mr. Shortley returns to the farm bearing the news that he has buried his wife, who suffered a stroke all because of the immigrant. Mrs. McIntyre rehires Mr. Shortley, but it only makes her miss the man’s wife even more, who was her only friend. Mr. Shortley, who feels his job is still at risk, is just the catalyst Mrs. McIntyre needs to fire the Pole. His argument is that some lousy immigrant should not be treated better than someone who “fought and bled and died in the service of his native land.” In Shortley’s world, killing people in the name of your country somehow makes you deserve a certain kind of job, even if you’re lazy at it, while a person who works very hard even after suffering immensely deserves nothing, simply because they weren’t born in the same country as the place where they work. His patriotism is a smokescreen for his selfishness, and Mrs. McIntyre falls for the ruse.

The day Mrs. McIntyre decides to fire Mr. Guizac, she witnesses Mr. Shortley back the tractor out and leap off of it in what is clearly an arranged “accident.” As Mr. Guizac is lying underneath a smaller tractor to repair it, the stray tractor runs over his spine, crushing it. All three present watch in slow horror as his doom is brought on, each an accomplice washing their hands of Mr. Guizac’s final displacement.

In the moments that follow, the grotesque redemption of a profane sacrifice is revealed as the priest foretold, but not how anyone would have imagined. The displaced refugee suffers a brutal death by the hands of the cruel, as did Christ. Mrs. Shortley’s fears had been realized. Just as she once saw a misshapen mass of twisted bodies in footage of a concentration camp, here the misshapen body of the Pole gathers the bodies of his family and the priest, who comes to administer the bread of Christ. Unable to deal with the shock, Mrs. McIntyre is emotionally displaced from everything she’s known. “She felt she was in some foreign country where the people bent over the body were natives, and she watched like a stranger while the dead man was carried away in the ambulance.” 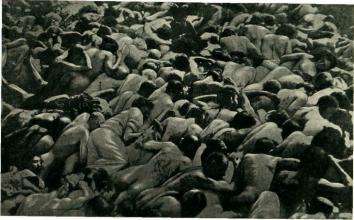 Instead of the refugee bringing the abomination of Holocaust to America, he brings the Americans to the abomination of Holocaust firsthand, by taking on its pain as an innocent sacrifice at their hands. As a result, everyone is displaced from the farm. All the help  leave and the landowner herself is hospitalized for a “nervous affliction.” Her bubble has permanently burst. Her kingdom has toppled because of the very death she partook in.

However, we are left with an optimistic note, as her declining health and wealth give an opportunity for her to focus on spiritual matters. Her only visitor for the rest of her life is the priest. Now displaced from privilege and material gain, she may finally be able to embrace the Gospel.

As critic David Griffith elaborates, Flannery O’Connor, who suffered from debilitating disease herself, “was comforted by the idea of a God that gave preferential treatment to the most vulnerable among us. The very concept of displacement­—to be without a community to care for you—rises to the surface in this story, and, as in much of O’Connor’s work, ostensibly Christian characters lose the courage of their convictions.”

We see this unfold in the story repeatedly, as the American citizens wrestle with the call to help the refugee, making excuse after excuse, when the truth of what to do is plainly before them as the feathers of a peacock. Everyone hunching over the refugee’s body in a barn might make us think of the “barnyard birth” nativity scene, everyone gathering around the world’ savior.

But we live in a nation where many Christians become bitter and resentful towards others who come to disrupt their own private sense of place, and trade Christ’s vision of a kingdom made from multiple nations for a vision of a land where their privileges will never be set aside for some foreigner who doesn’t fit in.

O’Connor’s story would serve us well today, displacing us out of our assumptions of what is rightfully ours, and placing us in the shoes of a humble and diligent servant who seeks to help bring redemption to others. We serve a God who will ultimately put us in our place, whether that place be the damnation of Mrs. Shortley, the salvation of Mr. Guizac, or the graceful “hell on earth” of Mrs. McIntyre in her final days, given a second chance to accept her place in the kingdom.

May our displacement shake our very spine, if that’s what it takes, to bring us to kneel in the presence of the grace of God.