President Donald Trump issued a new declaration:
“From this day forward, a new vision will govern our land.
From this moment on, It’s going to be America First.“

By default, this vision is also a promise to not put God first. 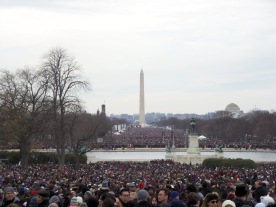 Then he goes on to say some stuff about how its bad for other countries to “make our products” and “steal our companies’ (even though many of his own products are made overseas, including his Vodka, which is distilled in the Netherlands), bringing back our borders (even though we’ve always had borders, and expanded them), not imposing our way of life on anyone (which would mean withdrawing our military from every other nation), and eradicating all Islamic terrorism from the planet (because that’s doable).

But let’s back up to that statement. “America first.” Maybe we misheard him. Did he really say that? “America first”? Surely, behind that, we will actually put God first?

No. He later clarifies,
“At the bedrock of our politics will be a total allegiance to the United States of America.”

Which isn’t a surprise, right? He’s a President of America.

I’m remembering that, and I don’t buy it. I am a Christian, and a man who promises to put an earthly nation first does not represent me very well at all. Far from it. That man is a liar. I knew this before he stepped into office. Let the record show.

Mr. Trump doesn’t seem to know who America’s people are, let alone who faithful, contemplative, humble Christians are. He quotes the Bible one time in his speech, and the verse he quotes is, “How good and pleasant it is when God’s people live together in unity.”

If Trump were a student of scripture, he would know that this verse referred to God’s people, that is, God’s followers, not to an earthly nation built by men. If a people put America first, they are not God’s people, and God couldn’t care less how unified they are (or, as in the case of Babel, he would be quite angry about it). And if they were God’s people, they would not be putting America first, even at the risk of America hating them for it. They would be putting God first. They would decrease, so that God would increase. They would ask their leadership to decrease also.

America’s president made his belief very clear that nothing can stop America, not even God. “When America is united,” he said, “America is totally unstoppable.” This arrogance is typical of earthly leaders with a high amount of patriotism.

The man then defied God by declaring that America “will always be protected,” disagreeing with countless scriptures that inform us that no earthly nation is forever, and that God can choose to protect or not protect any nation.

Comb back over his speech, and you will see that Donald Trump made a lot of promises that will either be disastrous or fruitless. You cannot promise someone they will never be ignored again. Nobody can make that promise. People get ignored all the time. Millions of Americans make a choice every election day that is ignored. Different people in America do not fill their hearts with the same dreams, either. Their dreams are diverse and sometimes conflicting with one another. The nation is divided. And if they are divided over your leadership, asking them to unite under your leadership will not fix anything.

Christians who are well studied in the scripture know very well how dangerous it is to put faith in any world leader, and if we have read of the temptation of Jesus in the wilderness we know how tremendously unfaithful it is to strike a deal with those who promise us earthly power if we give them our support.

No, Mr. President, because I am a Christian, I am not with your dream. I have no interest in making America proud. I am interested in making her humble. You and I have different aims, and I will not unite under your goals. We clearly salute a different banner. May God bless you in turning away from your vain promise to this nation and choosing a better one instead. I will pray for your leadership, not that your vision will succeed, but that you will be transformed into a more honest, humble, and loving man.

When you open your heart to patriotism, there is less room for God. Donald Trump made that very clear on January 20, 2017.

May the bedrock of our politics will be a total allegiance to JESUS
and not a place limited by borders.