The following are selected passages from An Authentic Derivative, my debut novel. These select passages are provided courtesy of the author, for your convenience. Mine them for what you wish, but only the novel can give you the full experience of the story as told by narrator Neil Oberlin. 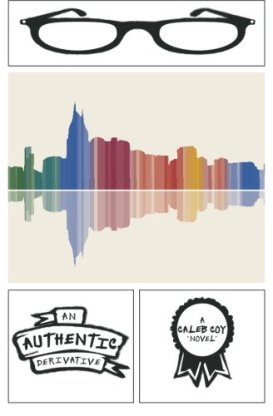 1 .
We shared one another’s favorite groups, dropping their names and matching them up like hands in a game of Gin Rummy we were playing in the back corner. Anecdotes about Wick were exchanged like currency:

Before he started out Sedgwick had dropped out of music school with a single credit remaining because he had broken two fingers in a bar fight the night before his jury recital. He had to buy a new cushioned wing chair every time he wrote a song. He painted his own equipment orange because he has an obsession with the color, proven by its heavy presence in each album, mostly appearing in a checker pattern, as well as the name of his debut EP, Orange. When asked by a radio host, he once said he planned to put out an album named after each of the prismatic hues, and never affirmed that it was a publicity stunt. He’d done uncredited guest recordings and surprise performances with artists like Bright Eyes, Arcade Fire, Neutral Milk Hotel, Sufjan Stevens, Nick Cave & The Bad Seeds, My Morning Jacket, M. Ward. He’d once covered Cohen’s “Bird on a Wire” and began crying, unable to finish the concert, and not a single fan demanded their money back, for they had all been privileged with such a raw moment. He didn’t drink, smoke, eat any meat other than fish, or have sex, all out of boredom with the banality of such indulgences, unadulterated dedication to his craft, and as a spiritual-seeker experiment he was performing as part of a personal journey. But we agreed that the performances had gotten lame.

2.
It was a comedy, an egregious satire. Julius laughed at the end of it and downed another beer. We all laughed. Julius bellowed. Joey still had a bright soul, I could tell from his giggle. He would point something out about you and you knew then that he knew you had a bright soul too. I was glad I’d run into him once again. I had stumbled upon the best. I wanted us to just get up and amble outward into the street after one another, or after the town, wherever it was going, but whenever I thought of it they snared me into some unnecessary philosophical abstraction, Jules gripping my shoulder and Joey kicking back in a schoolboy laughter I had to partake in. I was sipping nectar with Bacchus and Pan, I was with the Ghosts of Christmas Present and Past, and I was the Ghost of Some Obscure Holiday Yet To Be Future Conditional Pluperfect Subjunctive, and we would have been traveling through time and space if we could. It was the North Pole, it was 1893. It was El Tabernaculo in Grenada all over again, with spiced beer and minced pork all around, except pork would have been superfluous. In every moment I felt amused and bemused by the liminal griminess of the place and its pilgrims. Still, it was a little kitsch.

3.
“The solution is to abolish the privileges,” said Obie. “But let’s get real. When will they write that one into law?  We can hate people, oh yes, we can hate people all day. But dare not think of hating a system, no sir. No promo.”

“I think I remember that quote from Ignatiev,” said Virg. “Something like, ‘Treason to whiteness is loyalty to all races.’  I think that was it.”

There was a nodding of heads around the table.

“Profound,” said Emily, flattening the napkin in her lap.

“So I guess it’s up to us,” I said in soft derision, and everyone clinked their ice in their cups and picked their teeth with their tongues. It made me feel a tad pusillanimous.

4.
“We feel it takes the pressure off of people,” said Cody, “especially young people. Scriptures and traditions can be real intimidating, and sometimes it’s just good to close them up for a bit and talk about the issues that matter to us right now.”

“But eventually we open the Bibles up,” said Kip, with a wink. “I mean, you can’t have church without a Bible. But our efforts here are to make the Bible relevant, and relational.”

“We actually came up with a term together,” said Cody. He rubbed his hands together, and froze them still as if in prayer. “Relevational.” They both tried to hide their grins at this one. “See, it also makes us think of Revelation. So, they’ll be like ‘what’? And kind of get caught off guard. But it still sounds Bible-y enough to get our focus back where it belongs.”

5.
I’ve determined that hunger is the phenomenon that delineates an artist’s integrity. Some who work merely wish to hit the scene. The truly creative have an unhealthy work ethic, not motivated by deadlines, but by passion for the art itself. We starve for the ideas and their manifestation. The starving artist is starving not because he cannot afford to eat, but because he cannot afford to quit working on a pursuit regardless of the supply of bread. His or her bread is the work. A steady flow of capital is nothing without the threat of inspiration. Risk is paramount because it is the ward against stagnation, in which we cannibalize our own work, recycling as an ouroboros would its own tail. If we barely make rent, we are then reminded of the need to pursue the next great gig, because we are only as credible as our last accomplishment, and our last accomplishment must make us hungry for the next. You cannot dare be satisfied with a single thing you do. When you are satisfied, you have broken your fast.

6.
If a marriage in itself cannot be avoided, then it is the norms of a wedding that are shunned. This demurral often manifests itself in a wedding that gives more attention to theme than to pomp and circumstance. Attendees appear and realize the couple was serious about everyone bringing a walking cane and a monocle, donating to an animal shelter in lieu of gifts, choosing an abandoned equine slaughterhouse as a venue, or the bride sporting a faux mustache in all her photographs. To form a whimsical and radical wedding is to take ownership of it like no generation has before, to defy the industry of ceramic marriages that continually roll off the press and remain on the domestic shelf, stagnant and fragile, on the edge of shattering in the lightest of quakes.

When commitment is imminent, an obnoxious, Herculean task is set before us. We must craft the most trendy, personalized wedding experience the world has ever witnessed. We have seen enough brides walk down the aisle and be told afterwards, “you look so pretty.” We now want to prance on the lawn and hear them say, “I love what they’re doing with the whole marriage thing, totally rethinking the experience of being wedded—so edgy.” It is not so much a wedding as it is an interactive art project commenting on the lack of sincere, sustainable marriages, a subversive cry screaming to be articulated in a world of rehearsed rituals. Marriage for us is not the glorious beginning of life together, but an adorable accessory to it.

7.
If I am ever anything assuredly then I just may spend the rest of my life doing it over and over again. If we ever feel we are merely pulling a lever, pushing a rock up a hill and letting it roll back down, we get antsy. And this is why we put ourselves in quotations, because in this way we can do anything, and we refuse to be pigeonholed, because we have spotted the horizon, the far horizon, the same horizon seen by everyone else—only we have seen it through a spyglass we found at a consignment shop and refinished by hand.

8.
In any career there is always this vague longing for arrival. I can’t name a single intelligent person who can claim they have ever arrived anywhere. They’re always anxious about how much longer they are going to be cool with themselves being wrapped up in whatever they’re wrapped up in. We become fidgety, we grasp at constellations. If we can’t make something with our own hands, we consult. We dare not settle for crunching numbers, pulling levers, and digging posts. We’ll even settle for writing constellations into your coffee like foamy portents.

9.
I’m almost thirty. I have another young eternity to ride out. I’m supposed to hook up with someone or remain lonely, unless I latch on to my entrepreneurial dream. I’m supposed to be too clever for dreams. We’re supposed to paddle upstream, against the prevailing mood, delaying the delivery of the future until it is ours.

Buy An Authentic Derivative on Amazon!

[All passages are copyrighted by Caleb Coy. No part of these passages may be duplicated without acknowledging the author and work.]