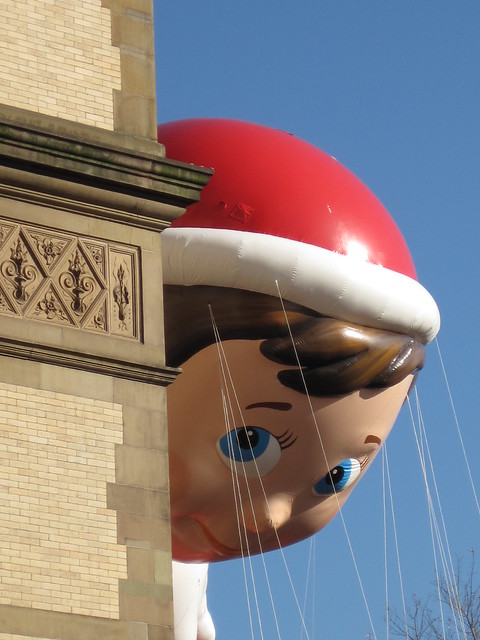 Despite a number of protests, my wife and I opted to do the Elf on the Shelf this year for our two-and-a-half-year-old. No, the protests weren’t from our child. I meant he protests in various blogs online, blogs that make very good points.

Even the Washington Post wrote about a professor who believes Elf on the Shelf is preparing our children to live in the surveillance state—he even compares it to Jeremy Bentham’s panopticon!

I get it, and I think it makes sense. Santa already represents for children an ubiquitously powerful being who showers children with toys once a year based on their behavior (or, as well all know, social class). To add a spying elf that the children are happy to comply with seems like raising them to be complicit with any measure any powerful entity in their life takes in order to keep up on their behavior—even in private!

Were that completely the case, I would join in the protest. I would have thrown out our elf. Done deal.

I take this subject seriously. I despise any man-made goevrnment trying to play the role of God as an “all-seeing eye,” even in the name of “safety,” “security,” “freedom,” or any other word rendered nebulous and meaningless by illegitimate empire. But pixie surveillance is a two-way street in this house.

1) In our house, we told our child to spot the elf every day.
All fun and games, but we wanted our child to try and find the elf first thing when he woke up. Vigilance doesn’t rest. Moves and countermoves. He has his own spying to do. And when the elf was discovered, we put him back in his place, limiting him to observe from only a single post.

2) In our house, we made it clear that the elf has his limits
The elf only sticks around for a couple weeks, then he’s gone. The reign of the elf is short-lived, and only serves a small purpose. Comparably, 2 out of 52 weeks of pixie spying is comparable to handing over only 0.04% of possible surveillance power. The elf can not and must not function all year. We have refused to grant him that much power.

3) In our house, we encouraged our child to challenge the behavior of the elf.
Sometimes, the elf is naughty. In fact, more often than not. One morning we discovered him trying paint a Christmas tree with toothpaste. Another day he was bathing in marshmallows meant for snack. One day our son awoke to find that he had turned our milk green, to which our son scolded, “No! Elf! Don’t turn our milk green! That hurts my feelings!” We punished the elf, putting him back in his place.

Christmas Eve morning we found the elf peeking into our child’s presents. We had had enough. We said byebye to the elf for another year.

It’s hard to tell if the Elf on the Shelf tradition is harmless. I am not aware of any substantial studies that prove the tradition to be brainwashing into happy acquiescence. But just in case it does, let’s be subversive about it. Give your child some power. Even go as far as making it safe to touch the elf.

Eventually your child will discover who really brings the presents, and that their behavior doesn’t determine how much is brought so much as the socio-economic status of the family, the will of the parents to spoil their child into permanent brat-hood, and the number of family and friends who participate.

Eventually, you’ll have to teach your child that if there’s a true meaning of Christmas attached to gift-giving, it’s not about behavior, but about love.