We know that not all gun owners are responsible for school shootings.

Why is it, then, that so many conservatives have a hard time learning that not all undocumented immigrants commit violent crimes?

Where are they getting their news?

Unfortunately, one of those places has always been Fox. On Wednesday, Brian Flood of Fox News called the death of Mollie Tibbett a “bombshell development” that the rest of the media had “ignored.”

Nevermind that the girl’s death was reported by CNN, and that CNN also acknowledged the murderer’s non-citizen status.

But according to Flood’s reporting philosophy, the killer’s non-citizen status was somehow central to the murder, as if not being American is what made him a murderer, as opposed to—I don’t know—maybe the actual facts of the case, which demonstrate that he tried to get something from her that she refused to give and he killed her because of it, something that happens in America all too frequently.

So if any part of his identity has anything to do with it, it would be his male gender. But of course, conservatives know better than to blame all men for what some men do. I wish they could apply that logic outside the United States.

Here’s a fact you just can’t get around:
Undocumented immigrants commit crimes at lower rates than native-born citizens.

This innocent victim’s murder at the hands of a violent man is not a “bombshell development,” and no media is ignoring it.

Here’s what Fox is ignoring, though. This comes from Business Insider, a far better source of news for conservatives:

“A study published in February by the Cato Institute, a libertarian [aka non-Democrat] think tank, further rejects the idea that illegal immigration is tied to increases in rates of violent crime.”

“Research found that native-born residents were most likely to commit and be convicted of crimes, while illegal immigrants saw a conviction rate that was 56% lower. Legal immigrants appeared to be the most law-abiding, with 86% fewer convictions than native-born Texans.”

Yeah, that’s right, Texas. If you want crime to go down, the solution isn’t building more prisons. It’s letting in more people who aren’t from around these parts.

One might say, “oh yeah? Does that count the crime of illegally crossing into the U.S.?”

And it sure does, brother. Crossing into the US illegally is a misdemeanor. So even if you count that, the violent crime number remains the same. (And by the way, being in America without documentation isn’t a misdemeanor or a felony. It’s a civil offense). 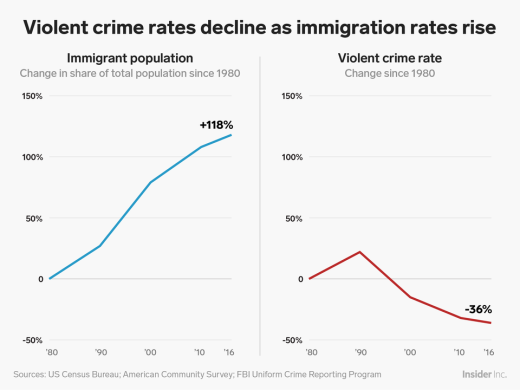 One might say, “well, in Mexico, thousands of women are murdered every year just for being female.” Suppose the numbers are that high, and suppose it’s not because the police are corrupt, but because the culture itself celebrates violence against women.

If so, then I would absolutely hate to have placed an obstacle in a woman’s path who is trying to come to a place like this where violence against women is (for the most part) less tolerated. I would hate to place an impediment to her freedom over some fear and misinformation from anti-Jesus reporters like Brian Flood.

So if you’re concerned about deporting people for committing violent crimes, you might want to look at your own citizens. What if you had this policy? If you commit a violent crime, you get deported, and a nonviolent undocumented immigrant gets granted amnesty to replace you.

Meanwhile, the family of Mollie Tibbets, the victim, have stood against using her death as a racist political rally against foreigners. A cousin condemned using her tragic death as “fuel against undocumented immigrants.” Another relative spoke out against Candace Owens for “using my cousins death as political propaganda,” [sic] demanding that she “take her name out of your mouth.” Let the victim’s family speak.

As others have pointed out, the white man in Colorado who recently murdered his pregnant wife and child isn’t giving Fox reason to proclaim a “bombshell” development. Nobody is demanding that white men be deported. (Okay, maybe a small group of fringe feminists).

Because it’s trash reasoning, and it is irresponsibly spread by people like Brian Flood of Fox News media.

Satan loves to give us false narratives. Show him you know better.