The Brothers Guard sit down for a dialogue review of John Mayer’s new album, Born and Raised.  A review that turns into a commentary.  And a trip down memory lane.  While we crank some good tunes. 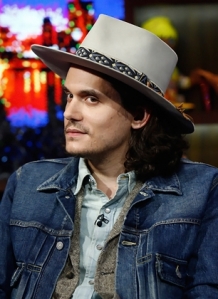 Luke: I could spend plenty of time interpreting this entire album and discussing it with you with no real end or destination in sight. Above all else, I think J.M. releasing this album was a lot about letting go.  He ditched his LA pad for a farmhouse and land out in MT.  He wrote in MT and recorded in LA, which I think says a lot.  I think this is some of his best writing it.

Caleb: Mayer’s musicology and lyrics have evolved a lot over the years.  Remember when he sang about showing up his high school class, comparing girly parts to a theme park, and matching the holidays with stages in a relationship?  And his stuff has grown more of a blues-country vibe, but without stepping into a genre he doesn’t understand.  It’s not the radical change the Beatles had.  No, this is John wading slowly into deeper waters.

L: His hair is long again, he’s got more tats than the original S.R.V. and instead of hunting the deer on his land in MT, and he’s been trying to get them to eat apples from his tree.  Now I want to someday spend time with him on his MT estate and talk about deer, the way the sun rises differently in LA than it does in MT, what finally made him move, ask him if anyone’s ever told him he looks like Jack White dressed as a scarecrow or vice-versa, and if he’s gotten those deer to eat apples yet.

C: There’s a big move now towards authenticity, especially as you move towards country.  The radio seems to have lost it.  Remember when Ashton Kutcher showed up dressed like an old-timey country crooner.  People thought he was mocking the genre.  He was paying homage to a land that forgot it’s roots.  Maybe.  Let’s get to the songlist:

“Queen of California”
Hello beauty.  Hello strange.  Hello wonder.  What’s your name?
L: Good road trip track; reminds me of an Allman Brothers song.  Also enjoy how he might be referring to her in the way that she views herself.
C: Funny you mention the Allmans.  Mayer deliberately nods to Neil Young in the opener.  He’s not holding back that he’s looking to a different set of roots and inspirations.  One listen to Young’s opening “Tell Me Why” and you knew this guy was going folk.  Plus he stole Neil’s hat.  I can just hear him covering “Ol Man” now.

“Age of Worry”
Close your eyes and clone yourself.  Build your heart an army.
L: Matthew 6:25-34
C: The melody and lyrics are Avettish.  They could have written this.  This is the song he was trying to write when he wrote “Waiting on the World to Change.”

“Shadow Days”
Did you know that you could be wrong and swear you’re right?
Some people been known to do it all their lives.
L: First lines remind me of “that sad day is coming.”  I also think there are some Grace vs. Guilt battles going on in his life and he chose to translate those into the track you’ve probably already heard on the radio.
C: In case you didn’t get it in the first track, or the title, he’s looking for a fresh start.  A conscious artist reinvents himself with every album.  Search for that “new deep.”

“Something Like Olivia”
Now I’m not trying to teal no love away from no one man
L: One of the two true blues tracks on this album.  Catchy and soulful.  Reminds me of a short story I read once about all the different women a guy dated before coming to the final one.  Something like Olivia…
C: Years ago I had a crush on a girl and another girl told me I needed a girl like her but different.  I think she was right.  Either way, I ended up with a good one.  Now there’s nobody like her.

“Born and Raised”
I still have dreams; they’re not the same—
They don’t fly as high as they used to.
L: I listened to this album while mowing a couple weeks ago and by the end of this track I was covered in not only sweat but tears.
C: Did you hit an onion patch?
L: No.  Mighta been the nostalgic part of me that connected with his words or thinking about all those kids out there whose parents don’t have each other.
C: Shh.  I wanna hear that harmonica part again.

“If I Ever Get Around to Living”
When you gonna wise up boy?
L: I first thought he said “rise,” not “wise.”  Maybe because I saw Dark Knight Rises or because in a way they mean the same thing.  I think this is a believer struggling with trying to justify his will over His.
C: Or it’s just John realizing that….something’s missing.  And he don’t know what it is.  In order to remake himself in a new image, to make it authentic, he has to visit his real roots.  Then he can graft the new ones in.  We all experience nostalgia for experiences we never had.  Might be a….quarter life crisis.

“Walt Grace’s Submarine Test, January 1967”
‘Cause when you’re done with this world
You know the next is up to you
L: I want Wes Anderson to direct the music video for this.  Reminds me of when we used to build forts in the basement, or whatever those were.  Cool story too.
C: Sufjan Stevens called.  Wants his song title back.  Wes Anderson wouldn’t use this song because it’s post 1970s and not British indie rock.

“Whiskey, Whiskey, Whiskey”
Walking home with no one left
Speak softly underneath my breath
Hey world, you ain’t seen nothing yet
Great, now it’s raining
L: Harmonica!  I kinda feel like he wanted one song where he could just complain or try to make everyone feel sorry for his fame.  Maybe not.  Oh well.
C: An egocentric artist always refers to his own art.  A good artist always has to use his art to defend his art to his fans.

“A Face to Call Home”
I am an architect of days that haven’t happened yet.
L: Inception.  Not really.  Kinda ends the album with promise.
C: He did not—did he really pull that pun?  No, he didn’t.  You think he’s lonely?

“Reprise”
L: I agree, think this album helped us grow up.
C: Reprise?  What is this, a musical?

Our appraisal:
Well, we got us here a fine piece of hand-carved tunes.  It’s a true confessional: The man emerges on the pop rock scene to gain a crowd, in the second go-round wants something deeper and manages it, swings in a third time establishing himself as a true young blues icon, proves he’s for real with a fourth return, and finally decides to grow up and come to terms with his identity, what kind of artist—and more importantly, what kind of man he wants to be.

The only thing missing is a track titled, “Why, Montana Why?” which should open with the words:
“I’m so pensive and
introspective and
now I’m wondering if
I should change my style
been stuck here for a while”

See, this time around he doesn’t sound like he’s trying too hard.  He came back from a long walkabout and is just going to sit down, bring out his guitar, open his mouth, and speak his matured mind.  You want to sit down by the fire with him and ask him what road he took to get where he was.  Because he sure wasn’t born there.  He had to get reborn.